They are Sabina Compassi, Dani Schnider and Bärti Bucher. All three are registered to line-up in Arosa on the 16th of August, extending the quest to identify the Last Ibex into the 2022 race and perhaps beyond. 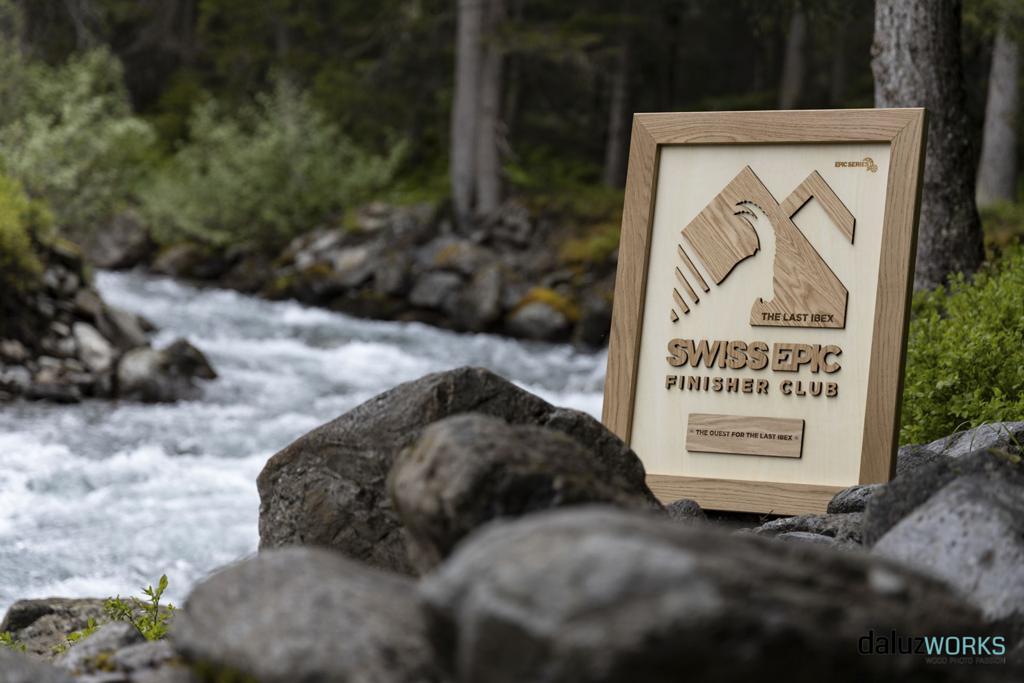 Mountain bike stage racing is all about dedication, perseverance and overcoming the obstacles which the route, weather, as well as one’s own body lay down. While the elite racers receive the acclaim of fans and the media, it is the age group campaigners who are the real heroes. Balancing work and family commitments to prepare for arduous Epic Series events, like the SPAR Swiss Epic, is by no means easy. Which is why the race rewards the riders who have completed three or more editions of the event.

Three riders deserve more praise than the rest. They are Sabina Compassi, Dani Schnider and Bärti Bucher. Since 2014 they have each completed every edition of the SPAR Swiss Epic, clocking up 103 000 metres of climbing and covering nearly 3 000 kilometres in the process. Ahead of their potential ninth finishes, the race commissioned a trophy for the Last Ibex.

Constructed by Davos based artist Remo Brülhart, of daluz works, the trophy is made from the same sustainably sourced local woods as the elite and category trophies. It will however only be awarded once the Last Ibex has been identified. Between now and the point at which only one of – Compassi, Schnider and Bucher – completes a SPAR Swiss Epic, the trophy will simply serve as a reminder of the competition of ultimate dedication and perseverance.

Already the three-way tussle has changed plans. Last year Compassi stated that she may miss the SPAR Swiss Epic, as she had an American holiday booked. Yet she will be lining-up once more, taking part in the Mixed Category race alongside Paul Bühler, for DANi Schnider Radsport 2. Compassi and Bühler are likely to challenge for a top five category finish in the mixed race.

Schnider and his partner, Thomas Stoll, compete in the ever-competitive Masters Category, as STOLL Bikes - Dani Schnider Radsport. While Bucher races alongside long-time stage race partner Hansjürg Gerber, for BiXS - Bike Holiday, in the Grand Masters division. Both Schnider and Bucher are unlikely to miss an edition of the SPAR Swiss Epic, such is their dedication to mountain biking. One gets the feeling then that only misfortune; such as that which stopped, Last Lion, Craig Beech from completing his eighteenth Absa Cape Epic in March, could derail the trio.

They are not the only riders to be honoured for their dedication to the SPAR Swiss Epic, however. Every rider who completes their third, or more, edition will receive a commemorative gift when they cross the final finish line in Davos. Inaugurated in 2020, the finishers’ club socks provide a visual reminder to riding companions of just how many SPAR Swiss Epics these Ibexes have completed. Ariane Lüthi, for example, stands to join the illustrious eight-time finishers club, while Lorenzo and Nicolas Samparisi could well join the finishers club by completing their third race, in as many years, together.

Each year-group, from three to nine, has their own colour socks; with the number of SPAR Swiss Epic finishes proudly displayed on the back of the ankle. To see who joins the club in 2022 tune in from the 16th to the 20th of August.