Legends Reunite at the 2021 Swiss Epic

When the 2021 Swiss Epic gets underway, on the 17th of August, in St. Moritz, Graubünden, there will be 9 Epic Legends on the start line

When the 2021 Swiss Epic gets underway, on the 17th of August, in St. Moritz, Graubünden, there will be 9 Epic Legends on the start line. They have all completed the race before, as well as the Absa Cape Epic and The Pioneer, fuelled by Nutri-Grain, to earn their Epic Legend medals. Yet they keep returning to Epic Series events. This is why… 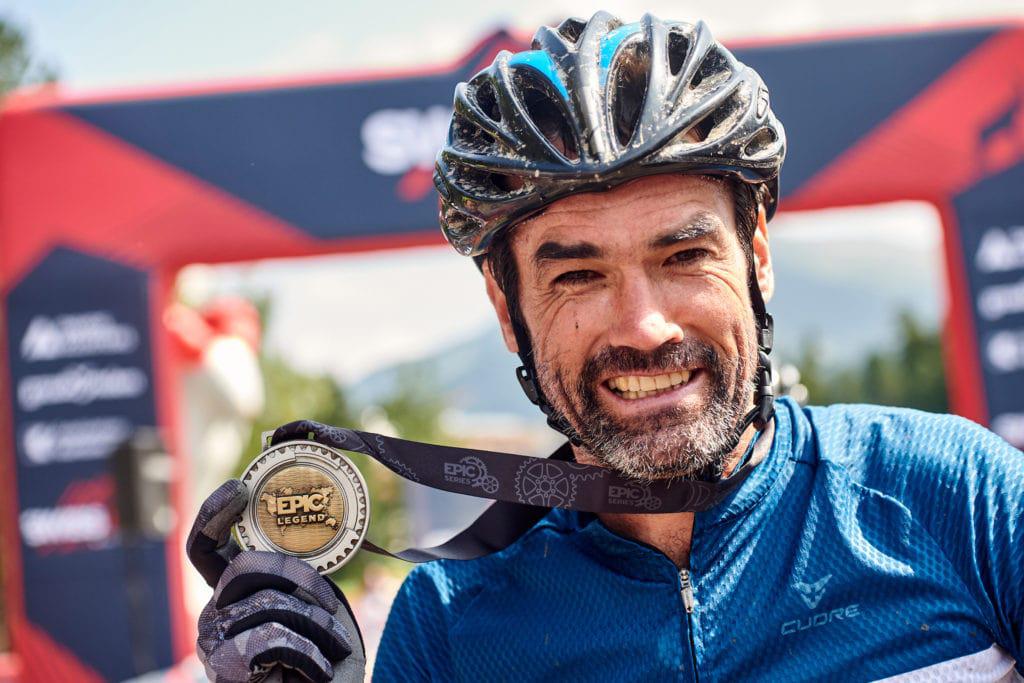 René Vallée, Ingi Már Helgason, Guðmundur Gíslason, James Scharf Jr., Xavier Scheepers, David Wright, Jóhann Þórarinsson, Peter Felber and Antonio Faundez are all set to continue their Epic Series journeys at the 2021 Swiss Epic. As they return to Graubünden, they each start at least their second Swiss Epic. Only the Swiss rider, Felber, has completed four editions of this particular Legend series event. They have all, however, also completed at least one Absa Cape Epic and an edition of The Pioneer, fuelled by Nutri-Grain. Still their hunger for stage races, in general, and the Epic Series, in particular, is unsatiated.

“I have so many nice memories from the Epic Series” Helgason smiled. “Africa and the Absa Cape Epic were hot as hell, in 2015, 2017 and 2019. The Pioneer, fuelled by Nutri-Grain, in 2019 was characterised by really nice people. And the Swiss Epic, in 2019, I’ll always remember for the beautiful Graubünden landscapes.  I’m so looking forward to returning again to the Swiss Epic. I’ve been promoting the race here in Iceland and 30 fellow mountain bikers will be travelling to Graubünden with me for the 2021 event.” 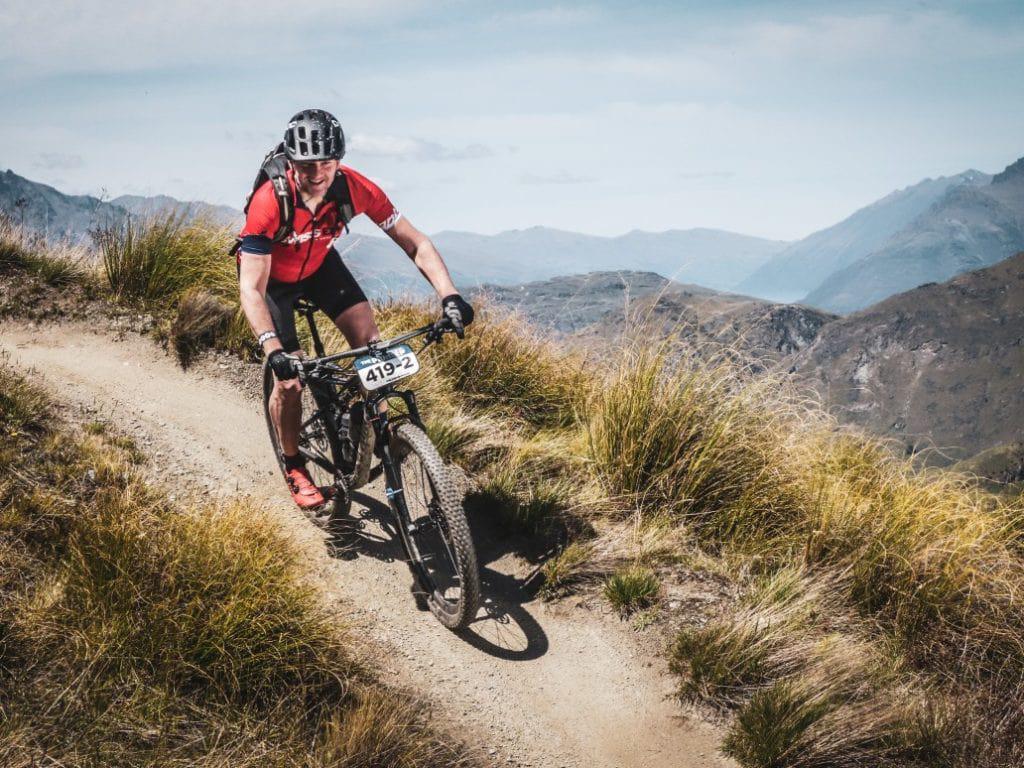 “This race is challenging for everyone and I want to challenge myself and my friends” Helgason added. “Preparing for an Epic Series race is always hard and Covid has certainly not helped. I haven’t done a race since the start of the pandemic. But Iceland is large and we can train hard outside, though the weather here is of course a factor.”

His fellow Icelander, Gíslason is looking forward to the high mountain passes of the Swiss Epic. “Conquering summits has to be my favourite Epic Series memory” he said. “The Swiss Epic, in Graubünden, is a great race. We’re well taken care of, staying in good hotels and being fed amazing food. This year, as Ingi Már [Helgason] said, there is also a big group coming with us. Many of them are new to the Epic Series. They’ve had to listen to our stories and now will experience it for themselves.” 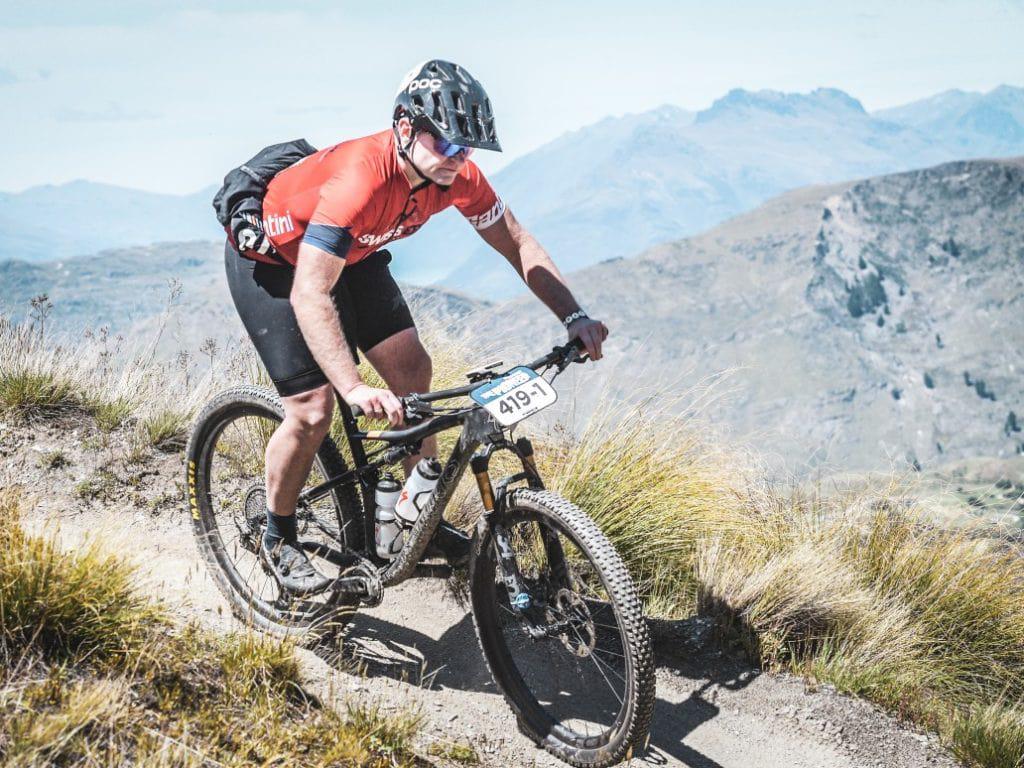 American, James Scharf Jr. is one of only a handful of riders to have completed all three – of the Absa Cape Epic, Swiss Epic in Graubünden, and The Pioneer fuelled by Nutri-Grain – in the same calendar year. His new goal is to repeat the feat with one riding partner. “I’m returning to the Swiss Epic because of the opportunity it presents to compete at a higher level and to complete this race with my new cycling partner, Edward Wimmer” Scharf Jr stated. “We are hoping to complete all three races together and have already signed up for the Absa Cape Epic as well. In addition to our racing aspirations, it must be said that Graubünden is such a beautiful place to ride a bike, too.”

“Participating in the Epic Series has been a game changer for me” he confessed. “It has changed my mindset and made me a more positive person.  I look forward to completing the series for a second time. It’s a long way away, but I can’t wait to cross the line – hopefully – with Edward Wimmer in Rotorua, in 2023. To watch him receive his medal will be fantastic.  To be an Epic Legend is an honour, but to compete in the races is a true privilege. If you’re considering entering just sign up today and pedal damn it!” 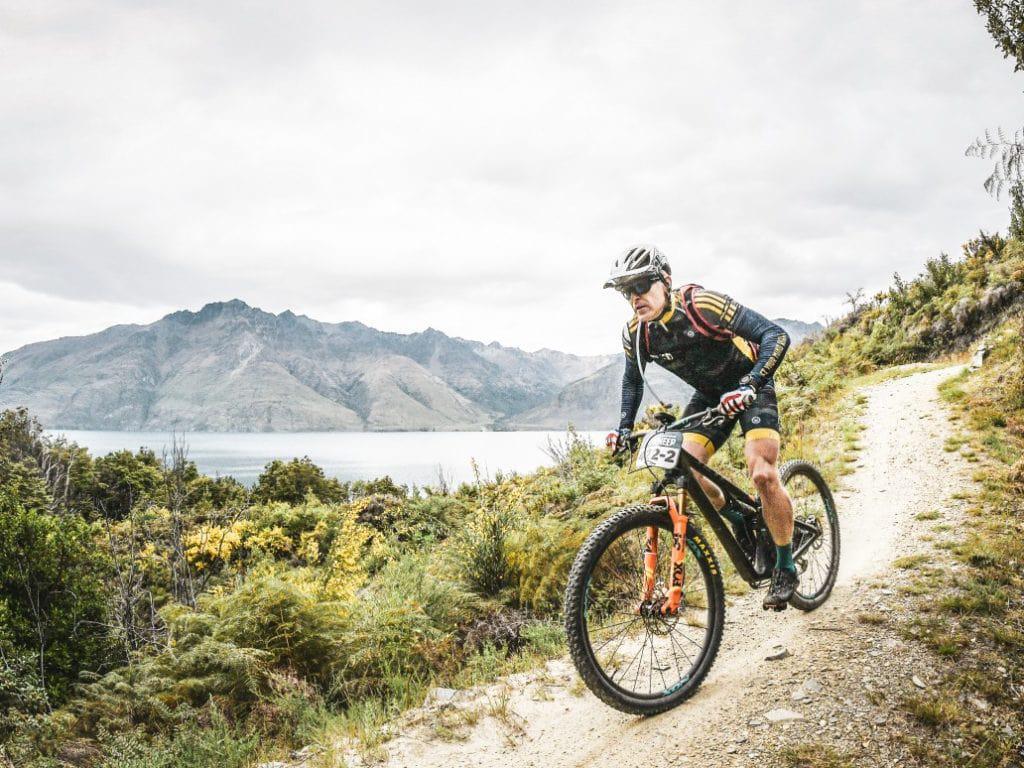 Wright will be riding with Felber, reuniting a partnership they formed at The Pioneer, fuelled by Nutri-Grain, in 2018. The Epic Legend medals are usually handed out on the finish line, but Wright forewent this ceremony and sent Felber to collect his instead. “My favourite Epic Series memory has to be of The Pioneer, fuelled by Nutri-Grain, in New Zealand” he laughed. “Whilst a few of us were celebrating in Queenstown, Peter was selfless enough to collect the Epic Legend medal on my behalf. A few of us speculate, however, that this was mainly so he could get close to [Epic Series Race Director] Kati [Csak].” 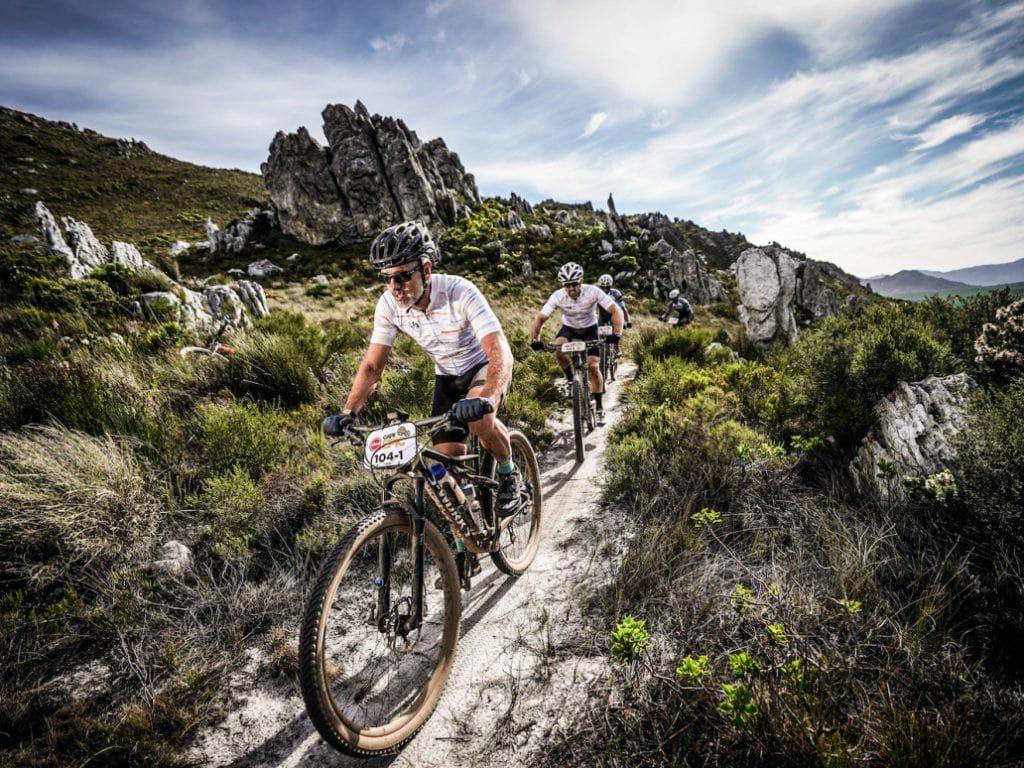 “My good friend Peter Felber (the real Swiss Epic Legend) was kind enough to invite me along as his partner for 2021, even though many celebrities were trying very hard to ride with him this year” Wright joked. “Sadly, being in Cape Town during the pandemic, the only races I’ve done in the build-up to the Swiss Epic, in Graubünden, have been on Zwift. Or from coffee shop to coffee shop amongst my riding group friends. I’m looking forward to returning to the Swiss Epic though! My expectations of Switzerland and the trails are always exceeded. The food in Switzerland is great, they even do amazing pizza, and an overall outstanding rider experience is always provided by the Epic Series crew.” 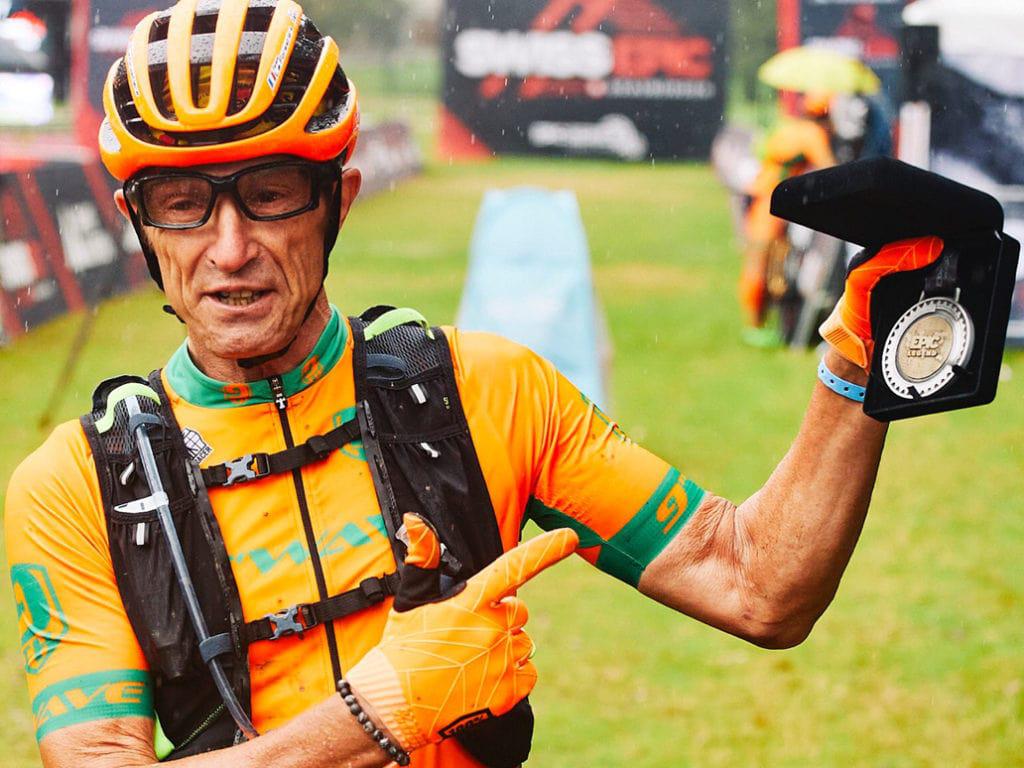 French rider Vallée is a singletrack devotee and it was the technical nature of the Swiss Epic routes which lured him back. “I am coming back this year because I was pleasantly surprised by the courses” he related. “Switzerland is very pretty and I’ve done lots of races in the country before but many use too many roads and not enough singletrack. But I was impressed by the quantity and quality of the riding in the Swiss Epic!  The organisation, last year, in the midst of the Covid period was exemplary, too. Most of all, though, I like the stage racing atmosphere. I’m probably in the minority but I wish there was a tented camp, like in the Absa Cape Epic. I find that it adds to the intensity racing experience.”

To follow these Epic Legends as the return to the trails of Graubünden, be sure to tune in to the Swiss Epic and Epic Series social media channels from 17-21 August 2021!