JBG2 CryoSpace climbed to the top step of the podium on Stage 2 of the Andorra MTB Classic-Pyrenees and, in so doing, jumped to second overall, behind Team BULLS. In the women’s race, RDR Italy Leynicese Racing Team continued their charge to race victory, with their third successive stage win.

JBG2 CryoSpace climbed to the top step of the podium on Stage 2 of the Andorra MTB Classic-Pyrenees and, in so doing, jumped to second overall, behind Team BULLS. In the women’s race, RDR Italy Leynicese Racing Team continued their charge to race victory, with their third successive stage win.

Stage 2 of the 2021 Andorra MTB Classic-Pyrenees was won by JBG2 CryoSpace and RDR Italy Leynicese Racing Team; in La Massana on Friday, 2 July. After two days of fiercely contested racing, the 60-kilometre-long route gave Jakub Zamroźniak and Krzysztof Łukasik the opportunity to reduce their general classification deficit to 3 minutes and 24 seconds. Team BULLS limited their losses to ensure they remain in the yellow leader yellow jerseys ahead of Saturday’s final stage. In the women’s race, Sandra Mairhofer and Costanza Fasolis continued their march towards overall victory, extending their advantage to 24 minutes and 7 seconds. 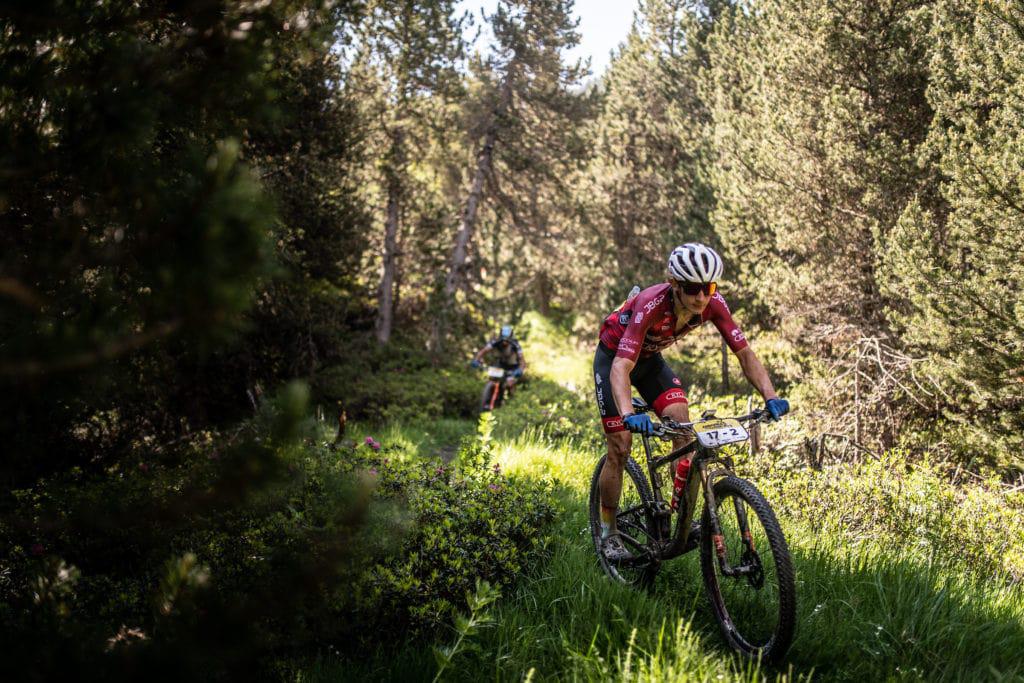 The Queen Stage of the inaugural Andorran MTB Classic-Pyrenees started in Canillo and raced back to La Massana. In the 60-kilometre distance the route climbed 1 950-metres and descended a thrilling 2 400-metres. The day also featured a climb to 2 322 metres above sea level, the highest point of the race at the Grandvalira Ski Station. It also boasted spectacular singletrack descents, which thrilled the amateur and elite riders alike.

After two days of Team BULLS exerting a quiet but effective dominance on the race, the Polish team of Zamroźniak and Łukasik broke the leaders’ grip on the Andorra MTB Classic-Pyrenees. The JBG2 CryoSpace used the 10-kilometre-long climb, to Vall de Montaup, to establish a 1 minute and 30 second advantage over Martin Frey and Simon Schneller. The men in yellow were not about to let their emerging rivals ride away, however. Once again showcasing their skills on the technical Andorran descents the Team BULLS riders utilised the Beixalis Enduro trail to reduce Zamroźniak and Łukasik’s advantage to just 48 seconds at the finish.

“After our bad luck on the Prologue, the last two stages have been better for us” Łukasik smiled. “We attacked on the last climb today and went as hard as we could to the finish.” “That was very hard” Zamroźniak added. “My partner, Krzysztof [Łukasik] really hurt me on that climb. But I’m happy we could take the stage victory and we’re looking forward to tomorrow, now.”

“Already on the first climb, to Gran Valira, we conceded about 30 seconds to JBG2 CryoSpace” Schneller confessed. “On the downhill that followed we were able to close that gap again though. Later, when BUFF Scott punctured, we could focus on defending our overall lead, and did not have to chase the leaders on the trail as they were 4 minutes behind us at the start of the stage.”

Team BULLS were followed across the line by Wilier 7C Force 1’s Johnny Cattaneo and Martino Tronconi. The Italians were just a second down on the overall race leaders and, as a result, move up on the general classification after their 7 minute time loss on Stage 1. The day’s general classification shake-up means that Frey and Schneller now lead Zamroźniak and Łukasik, with Cattaneo and Tronconi leapfrogging back up to third. After finishing sixth on the stage, following their puncture, BUFF Scott MTB Team’s Hans Becking and Francesc Guerra Carretero slip to fourth overall, 8 minutes down. Wilier 7c Force 2 round out the top five overall placings. 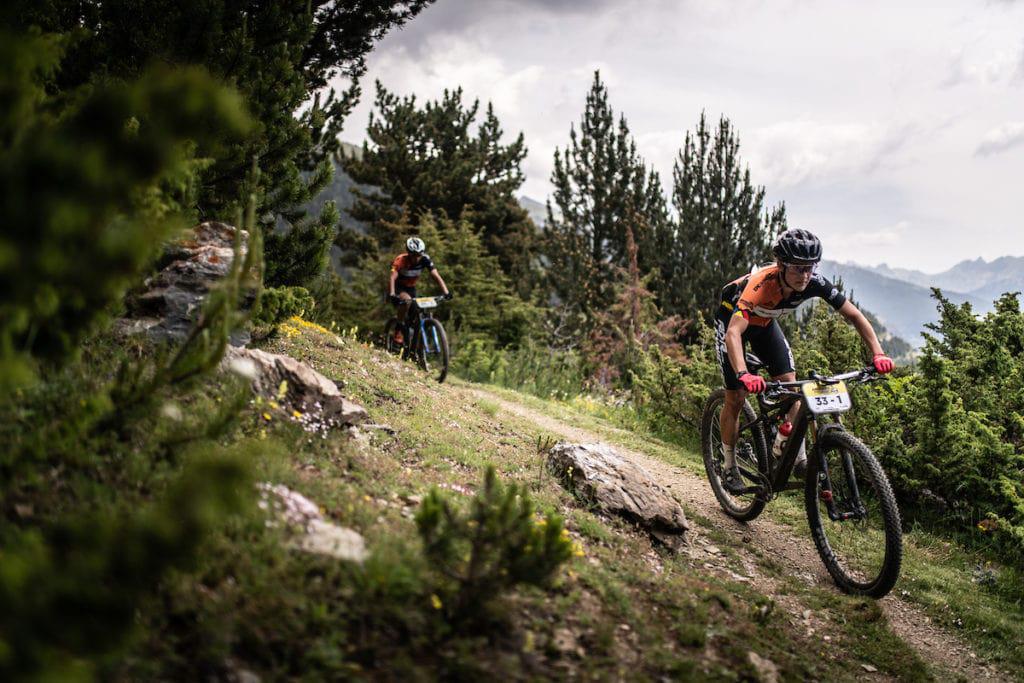 In the women’s race, Mairhofer and Fasolis further extended their overall lead with their third successive stage win. The pair rode away from their rivals early in the Queen Stage and continued to strengthen their lead throughout the day. “It was very beautiful in the mountains today” Fasolis noted, before turning her attention to how she felt during the race. “Some of the climbs were really hard and steep, but we enjoyed the route. It seems like we’re getting better day-by-day, riding better as a team and feeling stronger.”

The RDR Italy Leynicese Racing Team’s nearest rivals were once again the MTB Pro Merchandising pair. Alice Pirard and Greete Steinburg were also enjoying the riding. “It was an amazing day, again today” Pirard smiled. “The route was filled with stunning views, breath-taking trails and the singletracks had good flow, too. In short, it was a great day!”

After the third day of racing Mairhofer and Fasolis added another 12 minutes and 34 seconds to their lead over Pirard and Steinburg. Ariane Lüthi and Sandra Jordá were third on the stage, for Orbea Factory Team Women, and are now 1 hour and 23 minutes behind the orange jersey wearers.

The Andorra MTB Classic-Pyrenees did not just attract elite riders to the mountain Principality, however. Portuguese actor and avid outdoorsman, Rui Porto Nunes is among the 200 amateur riders taking part in the race’s first edition. “The mountain biking is great in Andorra” he emphasised. “The downhills are amazing and the climbs are great too, they’re just very hard. The highlight so far was the Commençal downhill on Stage 1, it was fast and flowing. For anyone thinking about coming to race here next year I’d definitely recommend the Andorra MTB Classic-Pyrenees, especially if they love singletrack riding.” 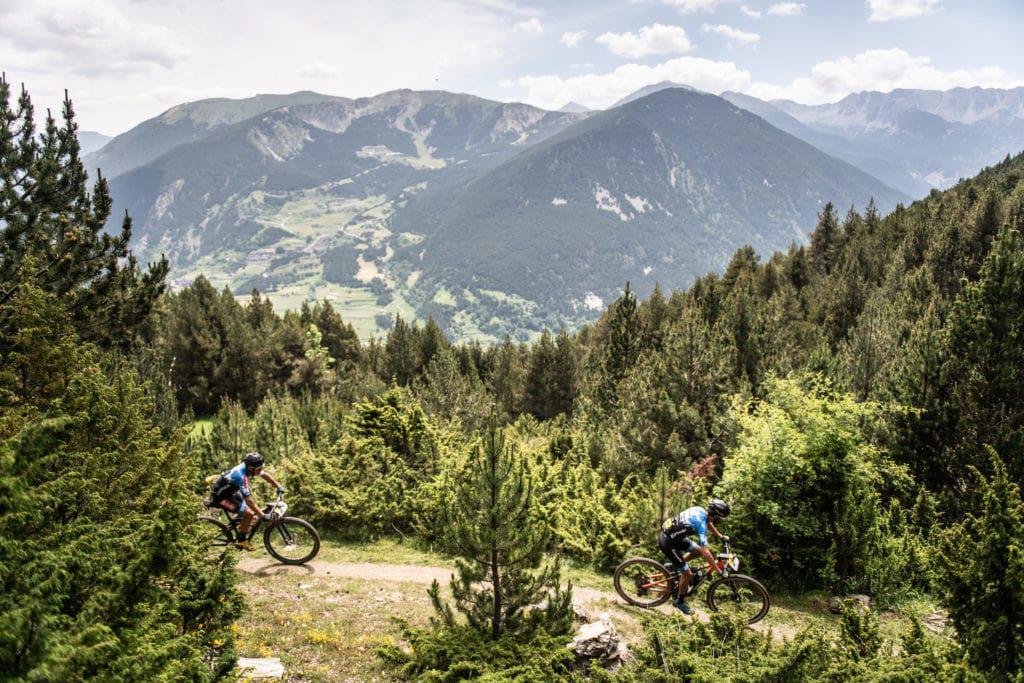 Stage 3 is once again packed with trails as the route takes the teams from Naturlandia to La Massana. As the final stage of the race, Stage 3 could be decisive in the men’s race in particular. Mountain biking fans are encouraged to tune in to watch the action unfold. Follow the race on  www.andorraclassicmtb.com or download the Epic Series mobile application, from the Google Play or the App Store, to do just that.