Set in the breath-taking mountains and valleys of Switzerland’s Eastern Graubünden canton it takes in 347 kilometres of world-class mountain biking. 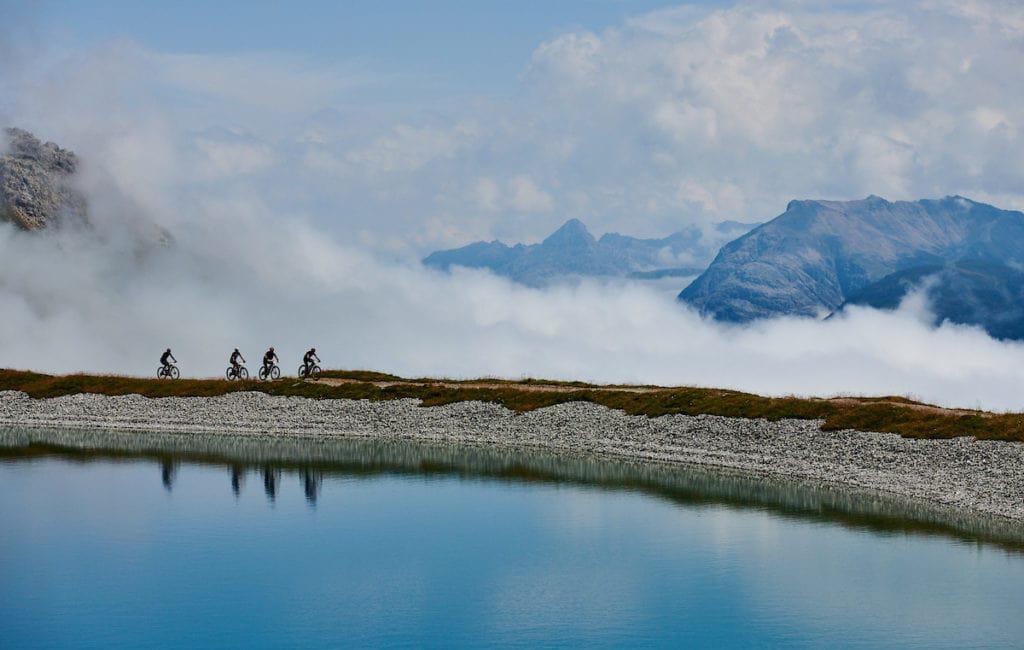 Set in the breath-taking mountains and valleys of Switzerland’s Eastern Graubünden canton it takes in 347 kilometres of world-class mountain biking. What makes this year’s edition so unique though is that the 11 800 metres of accumulated ascent are exceeded by the race’s total descent. In 12 700 metres of downhill natural singletracks and fast flowing trails await in August 2021.

Deep valleys, separated by high mountain ridgelines connecting towering peaks, characterise Graubünden. The home of the Swiss Epic and, arguably, one of the world’s best mountain biking destinations. Endless ascents, stretching far above the tree-line and into the clouds, are rewarded with descents just as long. This year a unique quirk of the host towns has allowed the Swiss Epic route team to create a route with more descending than climbing; rewards thus outweigh the challenges in 2021, though the trail to earning a finisher’s medal is anything but easy. 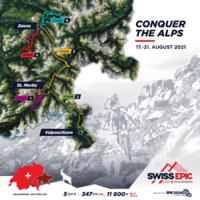 Taking place from the 17th to the 21st of August 2021, the Swiss Epic is one of the Epic Series’ flagship Legend events. The five-day stage race takes in 347 kilometres on its route from St. Moritz to La Prese, in Valposchiavo, before concluding in Davos. Teams familiar with racing in Graubünden will be aware of the volume of climbing the canton delivers, and the 2021 edition is no different in that regard. A demanding 11 800 metres of climbing separate the start, in St. Moritz, from the final finish line, in Davos.

Remarkably, though, the accumulated metres of descent outnumber the ascent. A total of 12 700 metres of downhill forest roads, flow trails and natural singletracks await the 400 teams who will be taking on the challenge of the 2021 Swiss Epic in Graubünden. This feat is made possible by St. Moritz’s higher elevation above sea level than the other two host towns. As well as by the fact that Stage 2 features a shuttle back from the low-lying Valposchiavo, to St. Moritz rather than an arduous stage across the mountains to the north.

La Prese is just 10 kilometres from the Italian border and is located just 965 metres above sea level. The riders will be shuttled back from the quaint village, in the heart of the spectacular Valposchiavo (or Poschiavo Valley in English) to St. Moritz after the conclusion of Stage 2. This also means that the teams will spend three nights in St. Moritz (16-18 August) and two nights in Davos (19 & 20 August). There is thus only one hotel transfer in the 2021 Swiss Epic and the teams will therefore benefit from less travelling, less packing and more opportunities to enjoy the world-class amenities of St. Moritz and Davos.

On the bike, the teams will be faced with a route with less huge alpine climbs, but rather more punchy ascents than in previous editions. These ensure that the elevation gained over the race of the race remains close to the 12 000-metre mark. Another rare reward is offered by Stage 4, which never exceeds 2 000 metres above sea level.

The 2021 route is characterised by scintillating singletrack, made up by a blend of purpose-built mountain bike trails and natural paths. The purpose-built flow trails include the Corviglia and Olympia Flow Trails; which carve their way down steep ridgelines, offering exceptional views and incredible riding. While the natural trails, for which Graubünden is famous, are hewn from the mountainside by Swiss cattle and the region’s icon, the Ibex.

Heading up the route team is Swiss Epic Trail Scout Stefan Wolfisberg. Having witnessed the exciting racing that the trail-filled 2020 route delivered, Wolfisberg is excited for the prospects of the 2021 race. “I expect the top teams to be closer together than ever this year” he predicted. “The long climbs usually provide the opportunity for the strongest teams to pull away and establish a significant advantage. But with less total metres of climbing and shorter climbs, the 2021 Swiss Epic will play into the strengths of the more technically skilled riders. Hopefully this means that the younger squads will be able to compete with the more experienced elite teams deeper into the race.”

“For the amateur riders, coming to Graubünden for the experience and to challenge themselves, the 2021 Swiss Epic remains a stern test” Wolfisberg warned. “The accumulated metres of climbing may be less than in previous years; but the short, steep ascents and long, yet thrilling, descents require both fitness and skill to conquer. My recommendation would be to install a smaller chain ring than you usually ride with, to provide an easy gear for the punchy climbs, and a dropper seatpost to allow you to master the technical downhill sections. Wider tyres and time spent training on singletrack climbs and descents will also pay dividends in the race.”