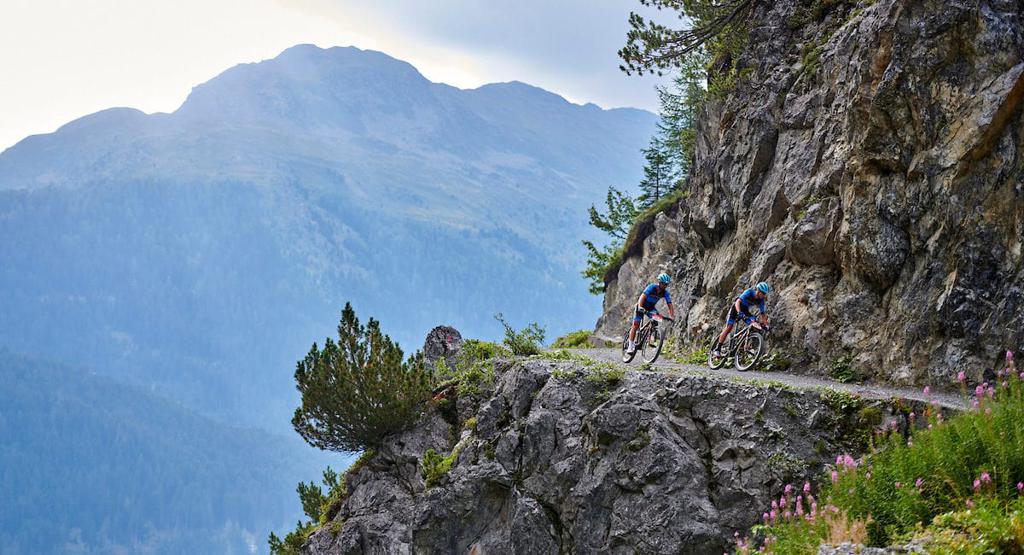 The 2021 Swiss Epic in Graubünden is sold out. Among the field are a fascinating group of riders set to battle through the Swiss Alps in search of Epic Legend status or to overcome personal challenges.

When the 2021 Swiss Epic gets underway in Graubünden on the 17th of August there will be more than 300 teams on the start line. Among them will be some of the world’s best mountain bikers and an eclectic mix of amateurs. Hailing from far-flung corners of the globe they are heading to the Alps with the aim of conquering climbs, swooping down spectacular singletracks and overcoming personal challenges in the bid to tick a bucket list event off their to-do lists.

Some of the most noteworthy are Epic Legends in waiting. Others are riding for a charitable cause, or to prove that they can overcome the Swiss Epic as they overcame disease. These are a few of their stories…

Benjamin Blanlot Mucke and his brother will be racing together as Blan&Lot by Honeystinger CL. The siblings hail from Chile, which is nearly 12 000-kilometres from Switzerland. They will thus, likely be, the team travelling from the furthest afield to reach the 2021 race. “We’re two Chilean brothers, coming from the south of the world, to conquer a dream” Blanlot Mucke stated, of the long journey.

The long journey to the Swiss Epic started for South African Mike Nixon in 2004. That was when he entered his first Absa Cape Epic. Since then he has completed all 16 editions making him one of the pride of Last Lions. Miraculously it will be Nixon’s first Epic Series event outside of Africa.

Nixon is not the only rider with Absa Cape Epic ties to be racing in Graubünden in 2021. Neil Ratcliffe and Sean Johnston are Epic Legends in waiting. Both have completed the Absa Cape Epic as well as The Pioneer, fuelled by Nutri-Grain, in New Zealand. Only the Swiss Epic finisher’s medal lies between them and an Epic Legend award. “After failing to complete Swiss Epic in 2018, I went on to complete Absa Cape Epic and The Pioneer, fuelled by Nutri-Grain, in 2019. Hopefully this time I will conquer the Swiss Epic in Graubünden and become an Epic Legend” he stated.

For Niel Louwrens the Swiss Epic is another opportunity to live his life to the fullest. “86 400 is the name of our team” he explained. “That is the number of seconds in a day. You cannot save them. You have to use them then and there. So, use them well.”

Hector Douglas Burger knows a thing or two about making the most of every second. “This year I’m fighting cancer, next year I’m fighting the Swiss Epic, in Graubünden” the South African pointed out. Burger will no doubt inspire many other cancer survivors to push their physical limits too.

While Caterina Capdevila Barredo and Laxmi Magar will be inspiring women from around the world. “Alpide Bike Girls are Laxmi, from Nepal, and myself, from Barcelona” Capdevila Barredo explained. “We met in a stage race in Sri Lanka, back in 2014, and immediately connected over our shared passion for biking. We kept in touch as we also shared the purpose of motivating and helping as much girls as possible, in Nepal, to jump on bikes. Though cycling they learn to feel good about sports and are empowered by them.”

“Laxmi and I always had the dream of doing a stage race together” Capdevila Barredo added. “We haven’t seen each other for 7 years, so I’m really excited to the adventure ahead. Laxmi, is an incredible mountain biker and has been very successful in her home country of Nepal. The opportunity to race in Europe is a massive one for her. As she says, the Himalayan goats are ready for the Alps!”

Another inspirational woman is Roma Puisiene. The Lithuanian is the 2018 Antarctic Marathon winner. She is “looking forward to new and enjoyable challenges in the Graubünden, during the Swiss Epic.”

Like Capdevila Barredo, Magar and Puisiene, Brett Burton is riding to improve the lives of young women. He will be raising funds for a women’s refuge in his native New Zealand. “The refuge is named ‘A girl called Hope’. It is focused on providing real alternatives for those seeking help with their mental health and well-being” Burton explained.

Rounding out a list of interesting riders who are set to line up for the Swiss Epic in 2021 is Jan Bill. The Swiss rider hails from Bern originally, but now resides in one of Graubünden’s southern valleys, Engadin. The adopted local works on one of the world’s premier cross-country skiing events, the Engadin Skimarathon. Along with skiing and mountain biking he’s an avid runner and swimmer. For non-Graubünden residents following the man in the PraxaMed.ch kit is thus a good way to gain local insight during the race.

If you’ve got an interesting story to tell as well, we’re looking forward to hear more about it. Please contact us via info@swiss-epic.com.