A day of hatricks on stage 2 at Absa Cape Epic

Today’s racing was simple and complicated, all at the same time, as four out of five categories claimed three-from-three stage victories. 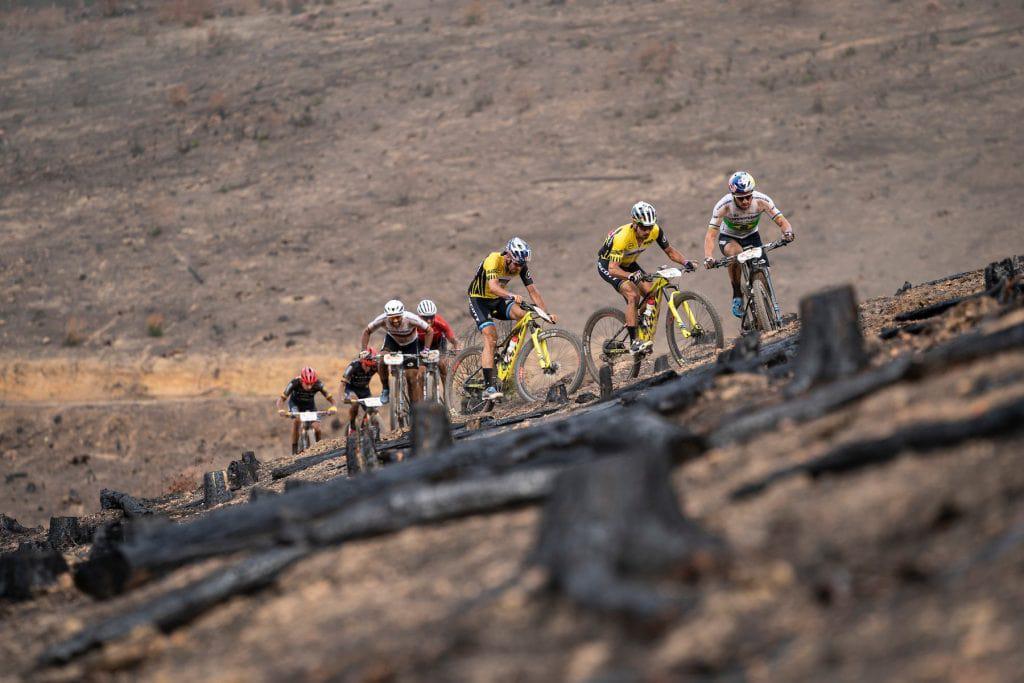 Today’s racing was simple and complicated, all at the same time, as four out of five categories claimed three-from-three stage victories.

The Swiss pairing of Nino Schurter and Lars Forster (Scott-SRAM MTB-Racing) once again topped the Men’s Race. As did Annika Langvad and Anna van der Breggen (Investec-songo-Specialized) in the Women’s category and Merida Factory Racing in the Dimension Data Masters category. Husband and wife team of Sebastian and Laura Stark (TBR Werner) followed suite in the Virgin Active Mixed too.

The Danish/Dutch duo of Langvad and van der Breggen extended their lead despite changing their strategy mid-race on Tuesday.The MTB and road world champion pairing made the decisive move about three-quarters of the way through the 90km stage from Hermanus to Oak Valley Estate in Elgin; but their plan before the start was to not attack their nearest rivals, the Kross-Spur Racing duo of Ariane Lüthi and Maja Wloszczowska.

“Yesterday (Monday) we were quite broken when we crossed the finish line, so today we actually wanted to try and save energy as much as we could,” said five-time World Marathon Champion Langvad as she recovered after the stage. “It was so far today that we just wanted to try and hang on to (Lüthi  and Wloszczowska), but at the last big climb we could feel that they were fading and so we pushed the pace a bit and got a gap. The climb is at the end of the stage, so you need to time it well to have something left in the tank after the climb.”

At the end of the stage Langvad and Van der Breggen had opened up a two minute gap which leaves them with a healthy cushion of close to eight minutes going into the 107km Stage 3. Wednesday’s stage is a tough out-and-back loop from Oak Valley that takes in the famed Groenlandberg climb and its treacherous descent.

The Summit Fin pairing of South Africa’s Candice Lill and her German partner Adelheid Morath crossed the line third and they are now 18 minutes off the pace in third position overall.

Despite building a big advantage before the riders have even reached the halfway stage of the eight-day event, Langvad refuses to be drawn into any talk of a clean-sweep of eight wins in eight stages. “Nothing about this race is ever sure until you cross the finish line – but so far so good,” was as far as she would go toward contemplating victory at Val de Vie Estate on Sunday.

Langvad’s Olympic Road Champion partner also refused to look too far ahead, but was clearly pleased to have come through the transition stage to Oak Valley unscathed. “I am really tired, but I am really happy with today’s stage,” said Van der Breggen after the finish. “We stayed with Maja and Ariane on the downhills and the technical sections, including the Land Rover Technical Terrain. We managed to keep up without crashing – and it was very easy to crash today because it was very fast. So that makes it a good day for me.”

Despite losing time on their main rivals for the third day in a row, Lüthi was clearly content to have increased their lead over the third-placed Summit Fin team.

“I knew that the time would come (when Langvad and Van der Breggen would break away),” said a philosophical Lüthi after crossing the line. “They are just playing it really, really smart. They are excellent riders and know how to play the game.

“They did not need to do any work in the front. It is our task to do that as we try to get away from third place. So I knew the moment would come when they would pull away, but it was good to ride with them and I was super happy to get a gap on third.

“As long as we can play it like that I am super happy,” added Lüthi.

The Swiss pairing of Nino Schurter and Lars Forster (Scott-SRAM MTB-Racing) once again left no doubt that they have the strongest legs at the Absa Cape Epic when they picked up their third win in three days on Tuesday.

After their tactical masterclass in Monday’s long Stage 1, the Scott-SRAM MTB-Racing pairing used raw power to generate the decisive stage-winning break on the 90km ride from Hermanus to Oak Valley on Tuesday.

Schurter and Forster launched a brutal attack up a steep climb 10km from the finish on Stage 2 and then powered away to a 30-second lead over the KROSS-SPUR team of Sergio Guiterrez and Ondřej Cink with Manuel Fumic and Henrique Avancini (Cannondale Factory Racing) a second further back.

Of course there were many stories and sub-stories to these victories. However the most fascinating tales are those being recounted by the warriors who make up the rest of the field. The EDGE chill zone abounds tonight with stories of long sandy stretches, tough climbs and exhilarating descends – mostly highlighted by the Land Rover Technical Terrain, a rollercoaster ride down into Wildekrans. As well as the iconic singletracks of Lebanon Forest.

Schurter and Forster now hold a four minute and four second lead over the Cannondale pair with Trek Selle San Marco’s Damiano Ferraro and Samuele Porro moving up to third, eight minutes behind the leaders.

The big losers of the day were former World Champion Jaroslav Kulhavy and Commonwealth Champion Sam Gaze (Investec-songo-Specialized). After starting the day in third position, Gaze felt the after-effects of his big crash on Stage 1 and they finished nearly 30 minutes off the pace to slide down to 19th overall.

In other racing categories, the only change to the leaders was in the fiercely competitive Exxaro Jersey race where Exxaro Pepto Sport’s Sean Baloyi and Anele Mtalana became the third jersey-wearers in three days. They won the stage by nearly six minutes to move four minutes ahead of Luyanda Thobigunya and Baphelele Mbobo (BMT Fairtree).

The husband and wife team of Sebastian and Laura Stark (TBR Werner) added another 12 minutes to their lead in the Virgin Active Mixed category, although the MMR Mixed team of former road riding world champion Oscar Freire Gomez and his partner Natalia Fischer Egusquiza moved up to third overall by finishing the stage in second place. Team Miller Paneling (David Miller and Shayna Poweless) slipped down to third after they finished the stage third.