Celebrations for Canada, Switzerland and the USA at the Grand Finale.

It was a classic scene at the start of the Grand Finale in Zermatt, to anyone who’s ridden a mountain bike stage race before. 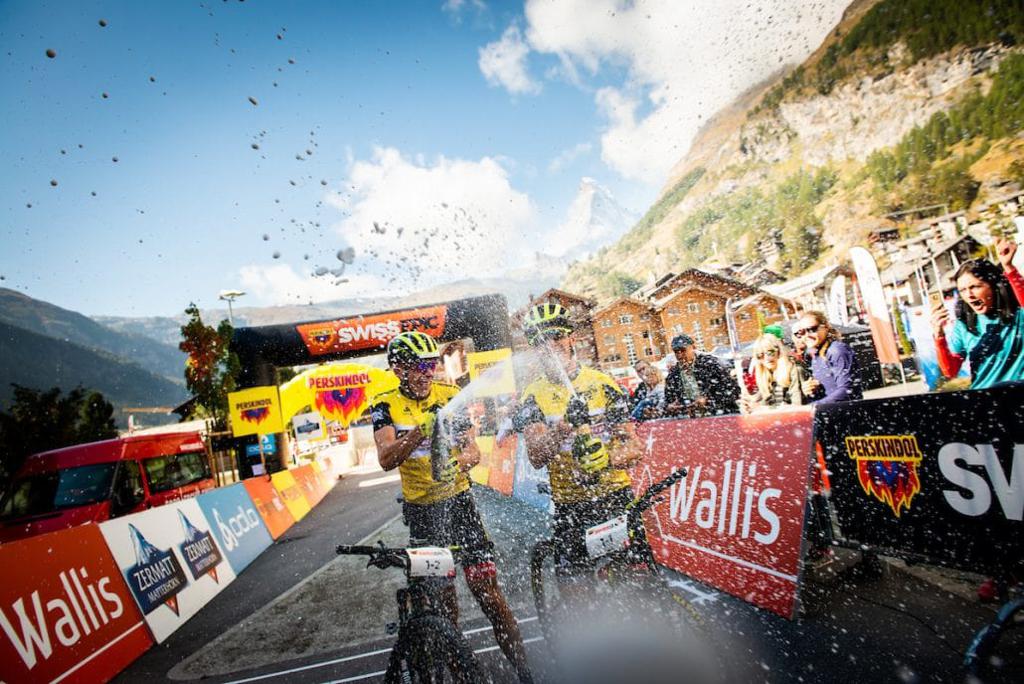 It was a classic scene at the start of the Grand Finale in Zermatt, to anyone who’s ridden a mountain bike stage race before. There was a familiar air of excitement among riders, fans and crew in the race village – the week of racing was coming to a close. However, experienced campaigners are well aware of the dangers of letting their guard down until they reach the finish line, so the good-cheer was mixed in with some trepidation.

Team USA Red held the morning’s good morale all the way till the end, taking the final stage. “It’s an amazing feeling to win the final stage here. We’re super stoked!” said a delighted Keegan Swenson. In the women’s field, the skies cleared and Team Canada turned out another super performance, taking their third stage win of the week. “We had an awesome ride today and we can see the Matterhorn – it gave us extra motivation!” said Pendrel, Olympic medallist and two-time world champion.

Scott-SRAM’s lead going into Stage 5 at the 2018 Perskindol Swiss Epic was comfortable, at over 15 minutes on Team BiXS, but Looser and Stauffer had USA Red’s Blevins and Swenson breathing down their necks, 5 minutes behind. In the women, Team Canada’s Catharine Pendrel and Haley Smith has 24 minutes on Thömus RN’s Keller and Stirnemann. Both the men’s and women’s leading teams looked set to take a no-risk approach to Stage 5, technical descents, opening the door for stage win hunters.

The course around Zermatt is packed with some spectacular scenery, even by Alpine standards. The Fluhalp at 2606m shows off a 360° view of no less than 38 mountain peaks. Dropping downs through Jojo and Moostrail, the riders, from the top professionals to the dedicated amateurs, kept their eyes firmly fixed on the trails to ensure that they made it home to enjoy a hero’s welcome and the legendary Finishers Party in Zermatt.

The front of the field saw some white-hot racing. Although a group of seven teams stayed intact till Täsch, it fragmented quickly with the powerful efforts of Keegan Swenson and Christopher Blevins of Team USA Red. By the time they reached the Fluhalp service station, they had a 45 second gap over Scott-SRAM and 1 minute 50 seconds over Team BiXS. “Keegan set a high tempo, just high enough to get a gap but not too high to blow up. Then we just held on…” said Blevins, recent silver medallist at the under 23 world championships.”

It was do or die on the descent. With Team USA Red up ahead, Scott-SRAM and Team BiXS set off after them, chasing a second stage win. Looser and Stauffer had more at stake – second overall was under threat with the charging Swenson and Blevins.  “We went all-in to save second on GC – if we had a flat we would get third anyway, but if we did not go all-in, we would also get third,” said Looser, current Swiss marathon champion.

Despite the determined efforts of Scott-SRAM and Team BiXS, Swenson and Blevins held on to their slender lead on the descent, taking the last right hand bend in style. A minute and a half back, Scott-SRAM arrived in the race village, knowing they’d done enough to win the overall title. The pair were greeted by two mountain biking legends at the finish line – Gary Fisher (forefather of the sport) and Thomas Frischknecht (Olympic medallist, multiple world champion and co-founder of the Perskindol Swiss Epic). Young Andri Frischknecht said, “It was great to finally win the overall, and a very nice surprise to see my dad at the end!”

There was no holding back for Team Canada in the women’s race. Pendrel and Smith opened up a healthy lead on the big climb. “We actually took it conservatively today but we managed to get a gap quite early on Ghost Factory Racing,” said Pendrel, her remarks perhaps telling of their rival’s fatigue after a long week of racing.

With an ailing Stirnemann, Ghost Factory Racing’s Anne Terpstra and Barbara Benko found themselves with an opportunity to move up a place on the overall standings. “Anne was feeling better today so we could really push on the climb and chase the Canadians, and at some point we realised that Thömus RN were struggling so we could maybe get second on GC,” said Benko, the Hungarian champion.

A definitive show of force: Catharine Pendrel and Haley Smith crossed the line over 6 minutes ahead of Terpstra and Benko. Team BikeFreak-Magazine – Merida-Scott’s Alice Pirard and Cornelia Hug managed to score their first podium of the week. Thömus RN lost over 21 minutes. “I had stomach issues. I was not sure I was going to make it,” said the multiple XCE world champion. They lost their second position overall, but prevailed to retain a spot on the podium.

In the other categories, it was a clean sweep for the Swiss. Fitness Maréchal’s Florence Darbellay and Jérémy Huguenin took the stage and the overall in mixed. Cykelmagasinet’s Kaare Aagaard and Thomas Nørgaard pipped Dani Schnider Radsport’s Dani Schnider and Oliver Imfeld for the stage, with Schnider and Imfeld winning on overall classification. In the masters, it was a perfect week for BiXS / Bikeholiday.ch’s Bärti Bucher and Hansjürg Gerber – dominant today, and the whole week.

For all who raced in the 2018 Perskindol Swiss Epic, it was by all accounts, an unforgettable week in the Swiss Alps. After navigating the fairytale-like Valais region, visiting quaint mountain villages all surrounded by Alpine landscapes, riders’ hard efforts on the steep climbs were rewarded with magnificent, sweeping singletrack and a heroes’ welcome in Zermatt. It’s certain that the Finishers Party at the foot of the Matterhorn would be a festive celebration.