Wednesday’s stage saw the leaders’ jerseys change shoulders in the men’s and women’s categories after a hard 77km with 2700m of climbing. 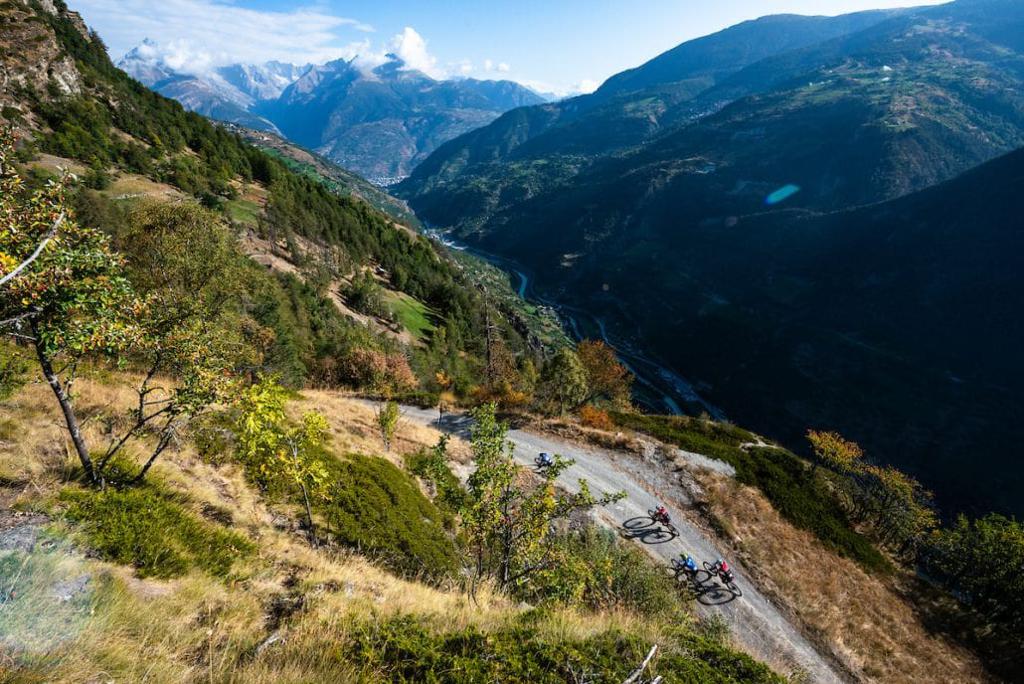 Wednesday’s stage saw the leaders’ jerseys change shoulders in the men’s and women’s categories after a hard 77km with 2700m of climbing. Bad luck struck overall leaders BMC Fischer Price with mechanicals costing them over 46 minutes. The leaders’ jerseys went to Scott-SRAM’s Frischknecht and Stirnemann.

In the women’s, Team Canada’s high tempo on the final climb put Thömus RN on the back foot, gaining Pendrel and Smith valuable time and also a significant psychological advantage over Keller and Stirnemann.

The scene was set for the queen stage of the 2018 race. Host to the XCM UCI World Championships in 2019, Grächen’s surrounding trails pose the ultimate test of any mountain biker, showing the highest ratio of climbing of all five stages, with the panoramic views of Moosalp as the perfect antidote. Correct pacing was to be crucial after Kalpetran, with a final sting in the tail.

Team USA Red timed their efforts perfectly, with Christopher Blevins and Keegan Swenson ramping up the power, distancing Andri Frischknecht and Matthias Stirnemann on the final slopes approaching the race village in Grächen. Even though Scott-SRAM regained contact, they had nothing left for the sprint finish, leaving the young Americans to soak up the glory.

The order of events of stage 3 looked likely to follow the same story as yesterday’s – for most of the stage, the front of the race saw Team USA Red and Scott-SRAM on their own up the road, with Team BiXS chasing on after another flat. But there was to be no fairytale ending for Looser and Stauffer. They were unable to close the gap after puncturing early on, perhaps paying for yesterday’s efforts.

After losing the rest of the field on the first big climb, Scott-SRAM and Team USA Red cooperated well. The multitalented Blevins is well versed in tactics, having already carved out a strong career path on the road. He was well aware that these efforts invested would stand them well on GC, come the end of the week.

Armed with the confidence gained from his silver medal at the under 23 UCI World Championships, he knew he had the right stuff to take on Frischknecht and Stirnemann – two-time stage winner and overall victor respectively at the Absa Cape Epic. “Keegan and I kept it steady on the climb – it’s a different kind of effort from cross country,” said the 20 year old. Team USA Red’s superb performance moved them up to third on GC, displacing Team Buff Scott, with took a distant third, well over 10 minutes back.

Scott-SRAM may hold the coveted leaders’ jerseys, but Andri Frischknecht and Matthias Stirnemann are still hunting for an elusive stage win. They’ll hope to make amends on stage 4.

Like in the men’s, the women’s field turned out another new stage winner. After a low-key start to the week, due to Barbara Benko’s illness and Anne Terpstra still on the recovery curve from complications of her ankle injury, Ghost Factory Racing crossed the line jubilant after some masterful teamwork in navigating the queen stage of the 2018 Perskindol Swiss Epic. Benko said, “Anne was going so hard on the climbs I had to tell to go a little slower because it was a log way up, and then she had to stop me from going crazy on the descents in case we had a crash or a flat.”

An early puncture put pressure on overall race leaders Catharine Pendrel and Haley Smith of Team Canada, who took care not to panic and managed their energy sensibly over the long climb. After an hour and a half, they managed to catch Thömus RN’s Keller and Stirnemann, who’d also flatted,but with Ghost Factory Racing still up the road, there was still some work to do.

Leaving Thömus RN trailing over a minute behind in their wake, Team Canada made the catch. But on the finale, Terpstra stretched her legs, taking Benko along, gapping Catharine Pendrel and Smith. By the finish, Ghost Factory Racing had a 1 minute 47 second advantage. Losing a chunk of time in the last few kilometres, Stirnemann’s energy levels dimmed, along with Thömus RN’s hope of an overall GC win.

For the other categories, it was business as usual. Masters Dani Schnider and Oliver Imfeld added another five and a half minutes to their GC advantage. Finishing at the same time as the masters winners, Bärti Bucher and Hansjürg Gerber had a super day out in the grandmasters category. Also looking set for the overall win in the mixed category, Florence Darbellay and Jérémy Huguenin took stage 3 by 14 minutes.

Tomorrow’s 61 beautiful kilometers transition the race towards its final destination – the mighty Matterhorn. Another action-packed day includes the coveted Europaweg and Sunegga-Flowtrail – guaranteed to deliver maximum fun! The popular ski resort of Zermatt is ready to give the riders a warm welcome after another hard yet highly rewarding day out.