Stage 1 at the Perskindol Swiss Epic saw a surprise victory in the Men’s category, when BMC Fischer Price held a high rhythm on the final 10km to overcome the considerable efforts of team Scott-SRAM 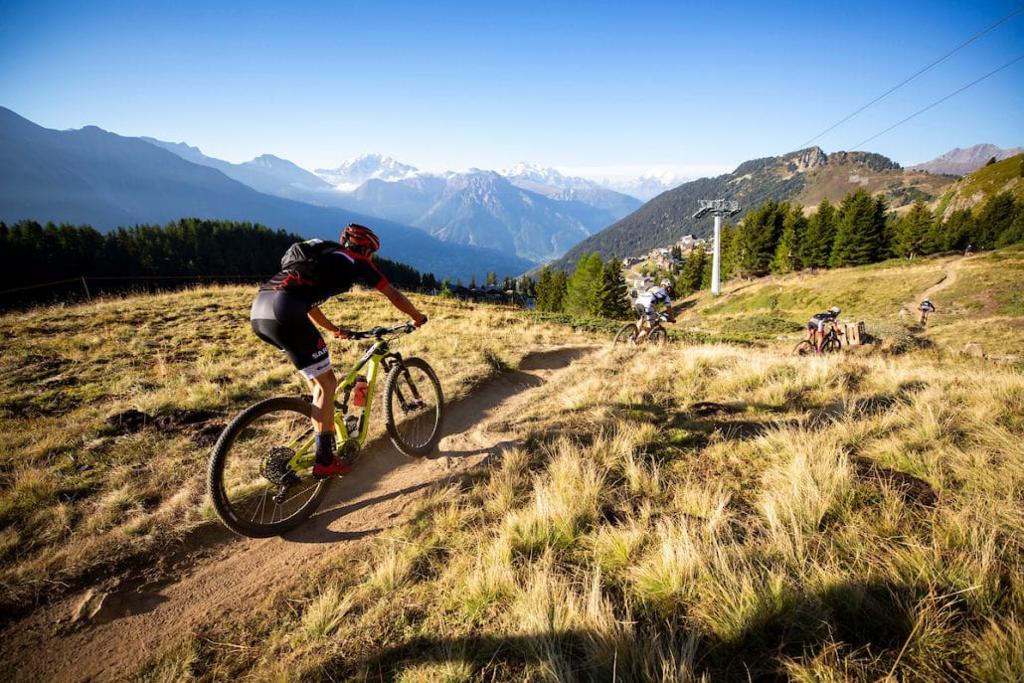 Stage 1 at the Perskindol Swiss Epic saw a surprise victory in the Men’s category, when BMC Fischer Price held a high rhythm on the final 10km to overcome the considerable efforts of team Scott-SRAM. Martin Fanger and Noah Blöchlinger found themselves in the coveted yellow leaders’ jerseys and a 55 second lead to defend.

The women’s race was even tighter – Team Canada led almost the entire stage but Team Thömus used their local know how to measure their efforts on the day and pick the perfect moment to pounce. Alessandra Keller and Katrin Stirnemann went into stage 2 leading by 36 seconds.

Both leading teams had their work cut out for Stage 2. Transitioning from Bettmeralp to Grächen, the route took riders via the ‘high road’ above the Rhone Valley, with views of the Matterhorn – their final destination. For many, the descent into Mörel would be a highlight, especially the saffron plantation, but there was still the final big climb before reaching second race village of the 2018 Perskindol Swiss Epic.

Stage 2 was one for the marathon specialists in the men’s field – BiXS Pro Team’s Hansueli Stauffer and Konny Looser prevailed over the 77km course, taking control of the stage on the final climb and resisted the efforts of Buff Scott and Scott-SRAM to take victory.

Earlier in the stage, it looked set to be a two-team battle between Scott-SRAM’s Matthias Stirnemann and Andri Frischknecht and Team USA Red’s Christopher Blevins and Keegan Swenson. “After the Mörel descent we kept a high rhythm on the first big climb and then it was just us and Scott-SRAM working together,” said Swenson.

Blevens then suffered a puncture at the bottom of the next descent. A hurried repair cost them more time, putting them out of contention. This left Stirnemann and Frischknecht in the lead alone, with a clear path ahead.

However the marathon specialists had other plans. Team BiXS’s Stauffer and Looser, who had also flatted early on, put in a strong ride in the flat section before the last climb and joined up with Buff Scott, setting off up the ascent in pursuit of Scott-SRAM. With Matthias Stirnemann struggling, Team BiXS and Buff Scott caught the overall race favourites. “Hansueli attacked – I waited till he was 100m away then I went across to him,” said Looser. Arriving at the line with 48 seconds over second placed team Guerra and Morcillo, the all-Swiss team had time to celebrate. Frischknecht and Stirnemann held on for third.

The overall race leaders BMC Fischer Price had terrible luck with four flats, finishing over 46minutes down, relinquishing the lead to Scott-SRAM.

Having learned a valuable lesson from yesterday’s narrow loss, Team Canada patiently waited for the right moment to make the decisive move. “Today was a super close battle, we were together at all the waterpoints, and then in the final tarred climb we pulled hard and got away.”

At the top, Smith and Pendrel had over a minute’s gap. Sensing their rivals’ weakness, they were keenly aware that this was a good opportunity to gain valuable time on team Thömus RN on the overall GC. They capitalised and stretched their advantage to 2m55s, earning themselves the coveted orange leaders’ jerseys.

Although their lead-up to the 2018 Perskindol Swiss Epic was far from ideal, with Terpstra’s ankle injury flaring up recently and Benko’s illness, Ghost Factory Racing still managed a creditable third.
Switzerland
In the Masters category we saw leaders Dani Schnider Radsport put more time into their rivals Cykelmagasinet to extend their advantage, as did Team BiXS / Bikeholiday.ch in the Grandmasters category. Fitness Maréchal now lead the mixed category by over 20 minutes.

This is the queen stage of the 2018 race. Host to the XCM UCI World Championships in 2019, the region features trails that pose the ultimate test of any mountain biker. This loop course shows the highest ratio of climbing of all five stages, with the panoramic views of Moosalp as the perfect antidote. Riders will need to pace themselves carefully – after Kalpetran, there’s a final sting in the tail.