“Nervous excitement” was the best way to describe the general disposition in Bettmeralp today. 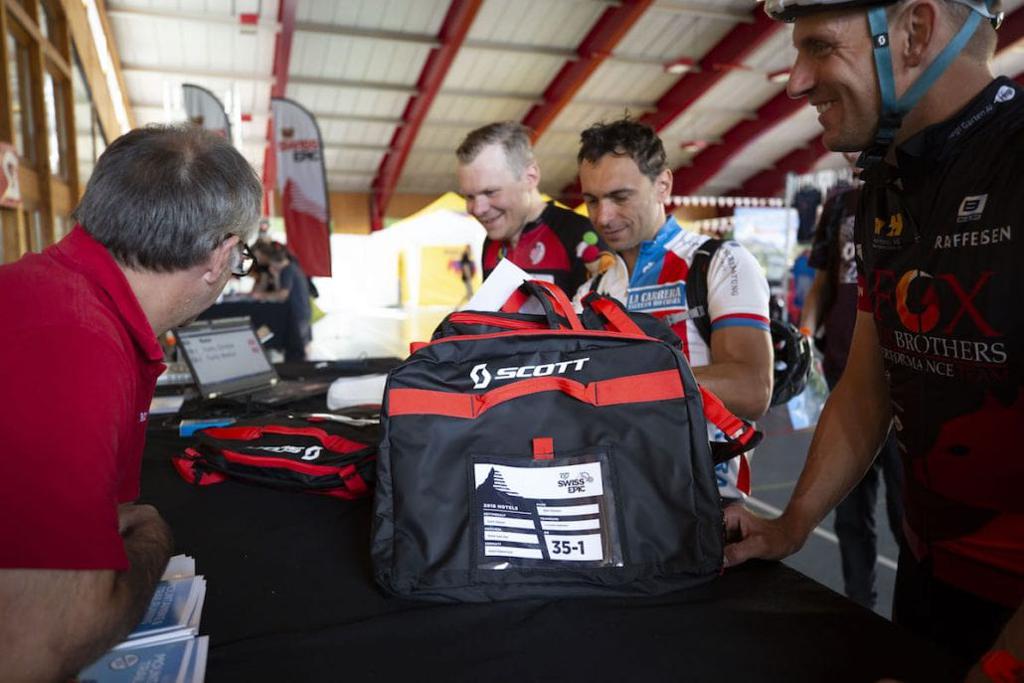 “Nervous excitement” was the best way to describe the general disposition in Bettmeralp today. Athletes registered for the 2018 Perskindol Swiss Epic arrived at the race village to collect their race packs, ready for the 5-day, 331km Alpine challenge. The race is set to take 336 mountain bikers, riding in teams of two, through the wild, pristine trails of the Valais region and by the time they arrive in their final destination in Zermatt, they’ll have climbed 12500m.

The 2018 event sees mountain bikers from 27 countries participating, the highest number of riders hailing from Switzerland. South Africa sees the second highest representation at 38, including rugby legend Marius Hurter. Starting his first Perskindol Swiss Epic, he has completed the Absa Cape Epic seven times and teams up with South African businessman and friend Greg James. “It’ll be a different kind of challenge from what we are used to – the terrain in the Western Cape is a lot flatter! We’ll take it day by day – our only ambition is to finish.”

At the front of the field, fans can expect a hard and close battle between some highly decorated athletes. Two-time world champion and Olympic medallist Catharine Pendrel signed on with Haley Smith, fresh off a superb performance at the UCI World Championships in Lenzerheide last weekend, “Really looking forward to racing with Haley, I know she’ll be a great team-mate.”

In the men’s race, BiXS Pro Team’s Konny Looser, Swiss marathon champion, is cautiously optimistic of him and his partner Hansueli Stauffer’s chances at line honours. “We have a good shot at the win and will do all we can, but Andri (Frischknecht) was 13th at UCI cross country World Championships and Matthias (Stirnemann) had good form at the last UCI World Cup…” says Looser referring to team Scott-SRAM – the race favourites.

As a three-time Perskindol Swiss Epic finisher, Looser attended the Perskindol Swiss Epic Finisher Club lunch, exclusive to the illustrious few who have completed three or more Perskindol Swiss Epics. Also present were four Founding Riders – those who’ve finished all editions of the race. A confident Bärti Bucher, a Swiss national who has also finished 10 Absa Cape Epics told the audience the secret to his perfect record, “Travel to warmer places so you can maintain your fitness…”

The Perskindol Swiss Epic is part of the Epic Series, which also includes The Pioneer – a six-day race held in the Southern Alps of New Zealand. Haley van Leeuwen and Minter Barnard are past finishers, and having completed the Absa Cape Epic too, they are in line to become the first riders ever to receive the coveted Epic Legend medal, should they complete the Perskindol Swiss Epic. “It’s really exciting… if you told me 18 months ago that I’d be standing here in Bettmeralp about to race 5 days in the Alps I would not have believed you.”

The weather forecasters predict clear skies and mild temperatures for the early morning start – perfect conditions for the 63km loop around Bettmeralp. The stage shows off a huge variety of terrain and riders are sure to enjoy a seemingly endless descent from the Fiescheralp to Fiesch. If that doesn’t take their breath away, there’s still the crossing of the suspension bridge at Ernen to come.