The fifth edition of the Perskindol Swiss Epic is set to be an enthralling race, and mountain bikers and fans will see the Valais region at its best.

The fifth edition of the Perskindol Swiss Epic is set to be an enthralling race, and mountain bikers and fans will see the Valais region at its best. The gun fires on Tuesday morning, 11 September with stage 1’s Bettmeralp-Bettmeralp loop kicking off with a bang. 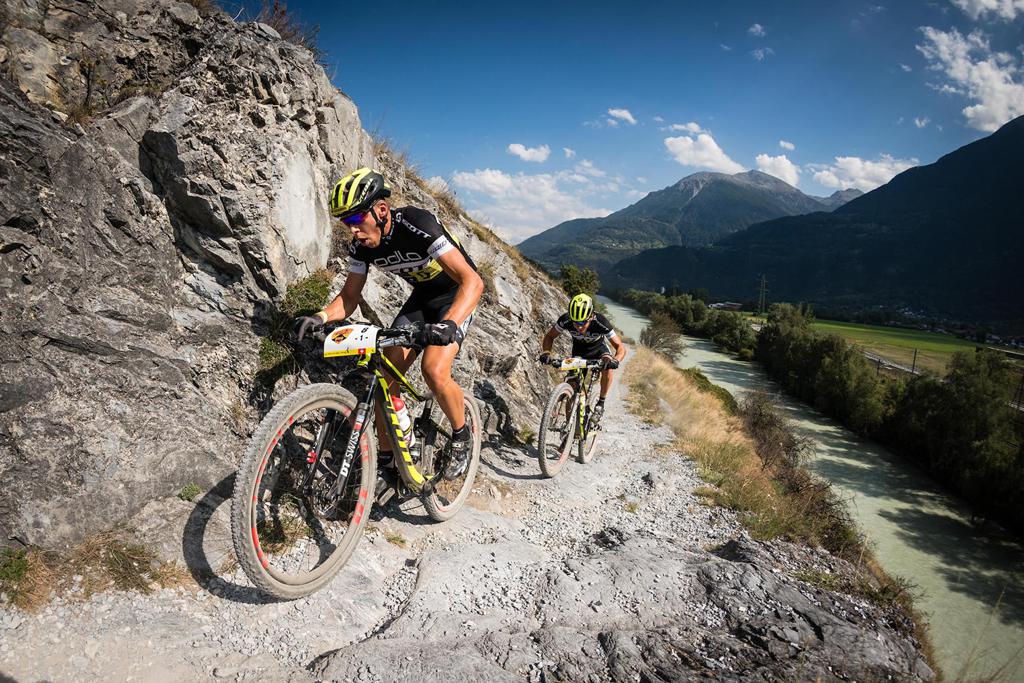 Riders will revel in the seemingly endless descent from the Fiescheralp to Fiesch and cross the beautiful suspension bridge in Ernen on the way back. The second stage starts as spectacularly as the stage 1 ends and the field transitions from Bettmeralp to Grächen, where the athletes await the ‘high road’ above the Rhone Valley as well the glorious descent to Mörel past the only saffron plantation in Switzerland. Stage 3 consists of another loop, this time around Grächen – the queen stage of the 2018 Perskindol Swiss Epic. During this stage athletes are rewarded with panoramic views of Moosalp and the engaging Kalpetran trails. At this stage in the race, recovery will be critical, to have a chance at glory. On Friday, the transition stage will follow the unique Europaweg to Zermatt, where riders will receive a warm welcome from the mighty Matterhorn. Then it’s Saturday’s Grand Finale – packed with exciting features, like the 360° vista at Fluhalp and the flowing trails of Jojo and Moostrail, before riders receive a hero’s welcome and get ready for the legendary Finisher’s Party in Zermatt.

The men’s field is headlined by strong Swiss team, Andri Frischknecht and Matthias Stirnemann of the SCOTT-SRAM MTB Racing Team who have made their ambitions for victory. Both won two stages of the 2017 Absa Cape Epic and Stirnemann took the overall win, riding with world champion Nino Schurter. Certainly, no less ambitious is Konny Looser together with his partner Hansueli Stauffer, fueled by the former’s second place last year. With Thomas Litscher, who has already finished two seasons in the top 10 of the UCI Mountain Bike World Cup and took bronze at the cross-country UCI World Championships last year, and his Austrian partner Max Foidl (Austrian U23 champion) sets the jb BRUNEX Felt Factory Team as one of the favourites. We will also see the appearance of the former mountain bike XCM (marathon) and XCE (cross-country eliminator) World Champion Ralph Näf who’s taking racing more casually after his retirement – he rides with the multiple Tour de France participant and former Swiss road champion Grégory Rast.

Just as illustrious is the women’s category, most notably Team Canada with Catherine Pendrel and Haley Smith. Pendrel, a two-time cross-country world champion and Olympic medalist, is looking forward to racing with Smith, this year’s third-placed at the recent Commonwealth Games in Australia: “I know Haley is going to be an awesome team-mate and the racing is going to be very competitive.” Riding for different trade teams, these two exceptional athletes have teamed up especially for the Perskindol Swiss Epic and hope that their outstanding technical skills will take them to the podium at Europe’s premier mountain bike stage race. Hard opposition can be expected from Team Ghost Factory Racing with Barbara Benko and Anne Terpstra. Benko is currently Hungarian champion and Terpstra a multiple Dutch cross-country champion. In addition to their undisputed qualities, there’s Terpstra’s experience – she has already participated in the Perskindol Swiss Epic twice. As with any Epic Series stage race, teamwork will be crucial, which Terpstra is well-aware of: “Barbara is my teammate at Ghost Factory Racing and we know each other very well. We have similar riding styles and I believe this will be a big advantage for us.” Asked about the competitors, Terpstra exclaimed “Catharine (Pendrel) has a lot of experience when it comes to all forms of racing and Haley has recorded some very good results this year already. This combination will be very fast and is our biggest threat for sure.” Terpstra seems to have put her bad luck behind her this season, after breaking her ankle in January and suffering a related infection. We might see a low-key start to their campaign, but expect a strong last two days from these two.

Local favourites, Team Thömus’ Katrin Stirnemann and Alessandra Keller are keen on taking the title at their ‘home’ race. Keller is well on her way to becoming a prominent figure on the mountain biking scene, having already beaten the biggest names in the sport, such as Jolanda Neff, Annika Langvad and Pauline Ferrand-Prévot this season at the UCI World Cup. Stirnemann brings her firepower as a former XCE  world champion and her experience in stage racing – a key ingredient for the win. Coupled with their complementary riding styles and a close friendship, the two are theteam to beat. “Every time we put a number board on our bikes we want to do well,” said Stirnemann. “But we also want to enjoy the race and we are just super excited and are looking forward to an awesome event with great trails and good people.”

Who knows, perhaps we’ll see two siblings Katrin and Matthias Stirnemann on the podium in Zermatt.Whatever transpires in the unpredictable world of mountain bike stage racing, there’s sure to be a fantastic week, full of thrilling highlights.