Marius Hurter might be big in stature but he’s also one of the nicest guys you’ll ever meet – on a bicycle. 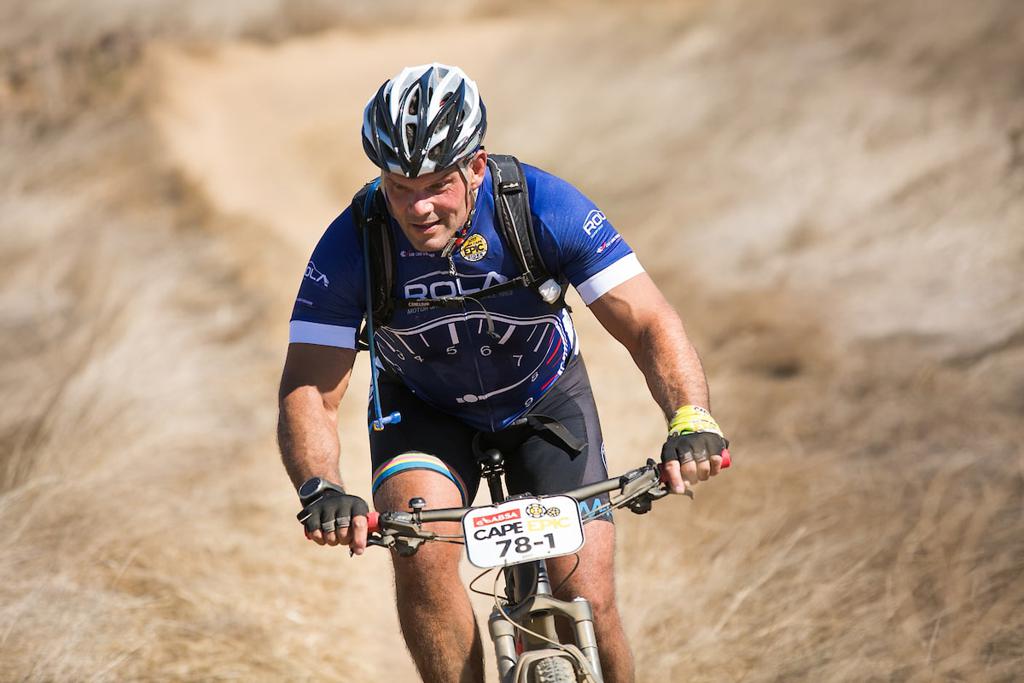 Marius Hurter might be big in stature but he’s also one of the nicest guys you’ll ever meet – on a bicycle. On the rugby field however, he was one of the most feared forwards in the world after making a name for himself with the 1995 Rugby World Cup-winning Springboks. Since retiring from the game, the big man has switched his focus to running and cycling, and the transition has been exemplary to say the least. The past several years has seen him participate in a slew of ultra-endurance events such as the Comrades Marathon, IRONMAN 70.3 and of course, the Absa Cape Epic. Next on his radar is the Perskindol Swiss Epic which he plans on tackling with long-time cycling buddy, Greg James. We had a chat to him at our Perskindol Swiss Epic Cape Town Outride last weekend.

What inspired you to race the Perskindol Swiss Epic this year?

While sitting at work my teammate, Greg James, phoned me and asked if I’d like to do the ‘Epic’. I just assumed he was talking about Absa Cape Epic but then he mentioned the Perskindol Swiss Epic. It’s obviously something that’s on my bucket list, so I definitely couldn’t turn it down. I’m very excited to take part.

Have you looked at the route profile yet – there’s lots of climbing?

Yeah, I’ve seen it on the website. It looks up and down and obviously being a heavy guy, I’m going to have to replace my granny gears again! We’re not coming into the Perskindol Swiss Epic with a racing mindset so, for us, it’s all about enjoyment and the downhills.

How is your preparation and training going?

In terms of preparation it’s difficult to train for something like this in winter, that’s the problem I have. So most of the time I’m on a stationary bike or maybe once a week I’ll ride outside. On weekends I’ll do some hill training but other than that, I don’t know, winter training is just very difficult.

How are your skills? Are you ready for the descents?

Greg told me I need to get a dropper seat post for the descents – I’ve got one. I haven’t got a lot of skills though, so I might have to practice on a couple of downhills in the Stellenbosch region. I’ll also use as much of my Absa Cape Epic experience to help me at the Perskindol Swiss Epic. I think between Greg and I, we’ve completed around 12 Absa Cape Epics, so we’ve got some experience when it comes to stage racing. But I’m still a bit cautious; cautiously optimistic. Obviously, this race is at altitude with lots of climbing but having a strong mind is just as important as having a strong body and from my personal experience your body is controlled by your mind. In terms of the effort I think it’ll be very much similar to what I’ve experienced at the Absa Cape Epic.

Have you ever used any of your rugby skills on the mountain bike?

I don’t have a real answer except that I certainly get more pressure from my saddle than scrumming down for the Springboks. You need to put in some time on the bike so that you get used to sitting in the saddle for ten hours or so. I’m not sure how long we’re going to spend in the saddle every day but yeah, let’s see. Teamwork is also very important, and this is a team event. It’s all about the teamwork, you know – doing stuff together, communication, sorting out minor issues when you’re irritated or tired and compromising – just like the rugby. It’s a team sport.

Who from the rugby world do you want to see on a mountain bike – have you challenged any of your old teammates?

I’ve asked a couple of guys if they want to come and do the Absa Cape Epic and they all think I’m mad. I don’t know whether they’re not up for a week-long sufferfest or if they’ve gained weight, I don’t know. I’ve asked Schalk Brits, he plays hooker at Saracens in England. He’s nearing retirement but he recently got called up as a replacement for the Springbok test series against England. I think he might be the guy that’s keen to do the Absa Cape Epic next – he also plays in the front row.

Describe your partner. What are your strengths and weaknesses, and how well do you know each other?

I know Greg James very well. Strangely enough, we met at an IRONMAN event in Port Elizabeth and bumped into each other at the Absa Cape Epic the following year. He’s a stable guy. He’s very calculated coming from a financial background and he’s got everything sorted on a spreadsheet. We know exactly where we’re going, how far, what speed, what altitude and he’s got all his nutrition worked out. I’m the opposite. That’s why I ride with him because all I want to do is ride my bike. I don’t think we have any weaknesses. We get along very well. Like I said, we’ve been participating on and off the bike for the past 10 years and we’re very much friends. I’m looking forward to a great partnership and a great week out at the Perskindol Swiss Epic.

Have you ever been to Switzerland before – what are you expecting?

I’ve never been to Switzerland before. I grew up watching Heidi (Girl of the Alps) on television but that’s as far as it goes. It looks beautiful especially the snowcapped mountains. I suspect it’s going to be chilly. We’re looking forward to it and apart from the riding experience, we’ll definitely do a bit of a Switzerland experience as well.

Do you plan on doing in sightseeing while you’re in Switzerland? What are you looking forward to the most?

Obviously finishing the Perskindol Swiss Epic with my partner is my priority. Hopefully there’ll be some beer involved, too. I don’t think it ever gets warm there but having a cold beer, or two, afterwards will be amazing. Some Swiss chocolates I hope, I’ve got quite a sweet tooth. I’d also like to experience a bit of the village life. Like the Zermatt village and the surroundings – it’s obviously very beautiful in that area. I’d like to meet the locals and chat to them and experience what life is all about in Switzerland.