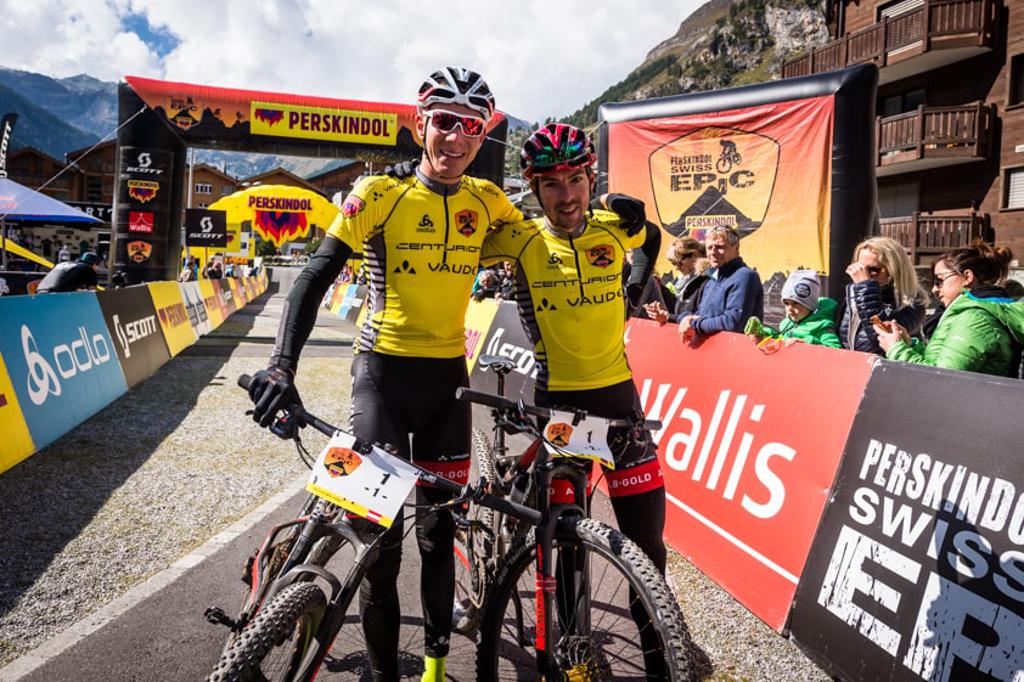 Today’s final stage of the PERSKINDOL SWISS EPIC again proved hard and challenging. However, it was nothing Daniel Geismayr and Jochen Käss of the CENTURION VAUDE team hadn’t seen before as they romped home to clinch a thoroughly deserved victory at their fourth attempt. Esther Süss and Jennie Stenerhag of Team Meerendal CBC took the prized PERSKINDOL SWISS EPIC championship belt in the women’s race. With Saturday’s award ceremony, the fourth edition of the six-day mountain bike stage race from Grächen to Zermatt via Leukerbad came to a successful close, with participants having covered a total of 350 km in distance and 12,000 m of ascent.

They’ve won it this time! The “forever second”, Daniel Geismayr from Austria and Jochen Käss from Germany, representing the CENTURION VAUDE team, resolutely defended their lead as they finished first for a well-deserved and possibly even overdue victory at the fourth attempt. They won the final stage in 2 hours and 45 minutes, taking the championship belt with 18 minutes to spare. “We’ve finally broken the jinx, this is a really big win for us”, said Jochen Käss, who was unable to fire on all cylinders due to stomach problems on Tuesday. “We feel so proud and are really delighted.” – “We managed our descents carefully today as we wanted to minimise the risk element. Our teamwork was again impeccable throughout the week – that’s what made the difference and brought us the win”, explained Daniel Geismayr.

The BiXS Pro Team with Swiss cyclists Konny Looser and Oliver Zurbrügg came second today, thus achieving second place overall. “We were secretly hoping for a podium finish at the start of the week, so we are over the moon to have come second”, said Oliver Zurbrügg. Konny Looser added: “It means so much to me to achieve second place in this home race and it’s a great way to round off the season.”

Texpa-Simplon, a new team set up at short notice and represented by Austrian Christoph Soukup and the Swiss Michael Stünzi, came in third.

The leaders going into the final stage of the women’s race, Team Meerendal CBC with Esther Süss from Switzerland and Jennie Stenerhag from Sweden, also won the overall event. However, Team Spur – Wallonie with Ariane Lüthi from Switzerland and Alice Pirard from Belgium continued their late rally by winning the final stage in a time of 3 hours and 24 minutes. “It was tough mentally to stay ahead of our competitors and the trails were really challenging”, commented Esther Süss on her first PERSKINDOL SWISS EPIC win. “It’s a great weight off my shoulders and I’m beyond happy.” Jennie Stenerhag said: “That’s the fourth stage race we’ve won together this year. We worked in perfect harmony again.”
The Scott Womens – R’adys team with Cornelia Hug and Florence Darbellay from Switzerland came in third.

In the race format SWISS EPIC FLOW, in which certain uphill sections are travelled using shuttles or cableways, the team Multitask Industries – Optiek Mertens with the Belgians Frans Claes and Michiel Van Aelbroeck won the men’s category. In the mixed category, Kristien Achten and Tim Jacobs from Team Perskindol – Vojomag took the victory.

You can find the complete rankings at:
http://my1.raceresult.com/63767/results?lang=de

The fourth edition of a very special mountain bike adventure has come to a close: PERSKINDOL SWISS EPIC, the most important stage race in Europe and one of most beautiful in the world, is over for another year. With a total of 12,000 m of ascent, a large part of the race was obviously decided in the many long uphill stretches. In return, the riders were rewarded daily with numerous downhill runs: countless long, gorgeous single trails gave them the chance to experience flow at its very best. And then of course, there was the unparalleled scenery of the Swiss Alps. Each individual stage provided plenty of breathtaking panoramic views of the Swiss Alps – and participants had an entire week to feast their eyes on the landscape.

Another very special aspect of this fourth edition was the atmosphere among the athletes. The international mountain biking community, made up of participants from 30 countries and five continents, formed a tight-knit group, in which fairness, cooperation and friendship were given highest priority. In short: PERSKINDOL SWISS EPIC is not just about winning; it is mainly about experiencing a fantastic mountain biking adventure as part of a team.

The next edition of PERSKINDOL SWISS EPIC will take place in the Valais again, from Tuesday, 11 to Sunday, 16 September 2018. Anyone wanting to take part in next year’s breathtaking mountain bike adventure can register online from November 2017: www.swissepic.com.

We are excited to join the family! From the Alps to the Western Cape of South Africa: following an agreement to be acquired by the IRONMAN group, the 2018 PERSKINDOL SWISS EPIC is set to serve as an Absa Cape Epic qualifier event, alongside The Pioneer race in New Zealand.
Since the IRONMAN group’s announcement in 2016 of the Absa Cape Epic’s acquisition, the team have been working on a vision to create a series of premium off-road endurance events in which athletes may qualify for the Absa Cape Epic, considered the most prestigious mountain bike stage race in the world. The PERSKINDOL SWISS EPIC will become the European leg, staged annually in the picturesque Swiss Alps. Founded by Joko Vogel, Daniel Gehrig and Thomas Frischknecht in 2014, the PERSKINDOL SWISS EPIC has built a reputation as providing spectacular flow trails and stunning snowcapped mountain vistas to amateur and professional riders alike.

“The race has established itself over the last four years, attracting riders from 30 nations. Now it’s time to reach the next level – it was only logical that we looked for an opportunity to elevate the race, not only to be the most iconic mountain bike event in Europe, but also to become part of an international series,” says Joko Vogel. Participating in the 2017 event, Olympic medalist, multiple world champion and five-time Absa Cape Epic winner Christoph Sauser described the trails to be the most beautiful and iconic in the world.

Ensuring a continued premium rider experience in the future, the PERSKINDOL SWISS EPIC event team will be collaborating closely with the organisers of the Absa Cape Epic.
click here for more information