Alban “The Albanator” Lakata cut a lonely figure as he completed Stage 4 of the Absa Cape Epic on Thursday – yet another quest to win a coveted Epic title doomed. 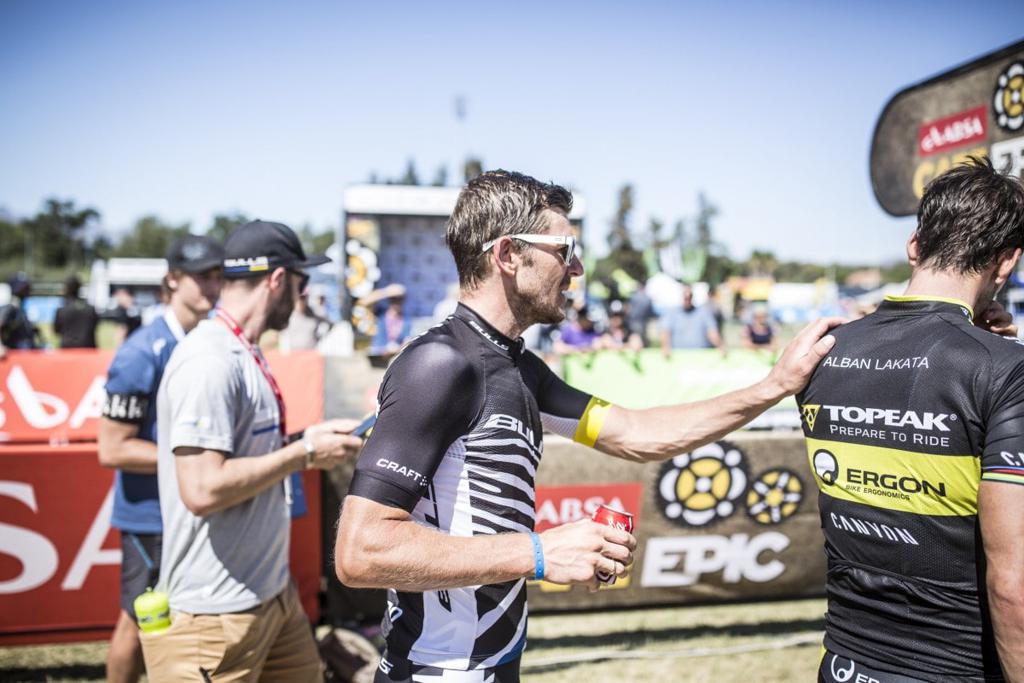 Alban “The Albanator” Lakata cut a lonely figure as he completed Stage 4 of the Absa Cape Epic on Thursday  – yet another quest to win a coveted Epic title doomed. His Topeak Ergon Racing teammate, the Czech Republic’s Kristian Hynek, crashed about 5km before the finish of Wednesday’s stage. Hynek started the stage on Thursday but pulled out before the first water point, leaving Lakata to continue on his own – leaving him to start as as Outcast on Stage 5 tomorrow, the status given to an elite rider whose partner has withdrawn.

Lakata and Hynek had gone into the race favourites after finishing last year’s event in second place.

In fact, Lakata’s Epic history had him making his way to the top of the podium with results that include: 6th, 5th, 4th, 3rd and 2nd in the race. He was just missing the Epic crown. But it was not to be.

Hynek required stiches on his elbow from a deep gash he sustained in the crash. He fell on his side and his ribs were also painful.

The team were in third place when Hynek withdraw, but have suffered a string of misfortunes, including wheel troubles for Lakata on the Prologue, a shoe malfunction for Hynek forcing him to swap shoes with his back-up team member Erik Kleinhans, on Stage 2, and Hynek’s race-ending crash on Stage 3.

It was only Stage 1 that proved incident-free with the pair finishing strong in second place, a mere 38 seconds behind the Bulls. At the press conference later, they looked composed and it seemed they would be the only team able to topple the rampant Bulls.

Hynek won the Epic in 2014 but rode with Germany’s Robert Mennen, who was called up at the last minute because Lakata snapped his Achilles tendon in a skiing accident.

After he crossed the line on Thursday, Lakata, the 2015 Cross Country Marathon World Champion and six-time Austrian national champion, was visibly disappointed. He said it felt that he was doomed never to win the Epic. “This race is so difficult, and anything can happen. It has been really tricky this year because it’s been so dusty – you can’t see where you’re going,” he said. “It’s more taxing to ride in front, but at least you have a cleaner line.”

Lakata had ridden alone behind the leading group on Thursday because he did not to interfere with the racing- besides, he added, “it’s difficult to find motivation when you’ve lost your partner – but it’s not his fault”.

Lakata said he had chatted with Hynek before the start of the stage and the two had resolved to come back next year – stronger, more prepared, and hopefully with luck going their way.