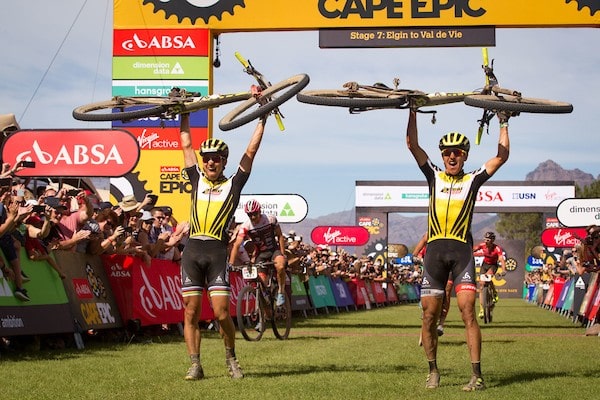 There was a second stage win for the SCOTT-SRAM Young Guns of Michiel van der Heijden and Andri Frischknecht at the Grand Finale of the 2017 Absa Cape Epic, but the crowds at Val de Vie in Paarl had lined up to watch Olympic champion Nino Schurter and partner Matthias Stirnemann claim their maiden Absa Cape Epic crown.

Riding as a team for the first time, Schurter and Stirnemann (SCOTT-SRAM MTB Racing), along with their Young Guns back-up team, dominated the final few stages of the 2017 Absa Cape Epic. It meant they went into the final stage with a seven-minute gap over second-placed Christoph Sauser and Jaroslav Kulhavy (Investec-Songo-Specialized). With Sauser’s experience, however, Schurter and Stirnemann were taking nothing for granted on the 85km Grand Finale.

“Today the plan was just to get to the finish. We didn't want to do anything stupid,” said an elated Stirnemann. “It was quite emotional for me, because anything can happen and at the beginning we thought Christoph and Jaroslav would attack, so we just wanted to stay with them.”

As has been the case all week, though, Sauser was unable to find his legs when he needed them most. “Right after the start we noticed that Christoph wasn’t doing so well,” said Stirnemann. “Then I started to relax and we just rode sensibly so that there were no punctures or crashes.”

The Absa Cape Epic debutant could hardly believe that he had won the event on his first attempt. “This is amazing, just amazing. I really can’t believe it. I think I need to go home now and take it all in before I realise what this means. It’s been great to ride in the yellow zebra jersey, and of course even better to finish in yellow and win the Absa Cape Epic.”

Schurter, a bronze, silver and gold Olympic medal winner in cross-country racing, the win comes in his fourth Absa Cape Epic – his previous best had been a fifth place in 2014. The current Olympic and world champion, cool and calm as ever at the end, admitted that the strategy was always to come and win the Absa Cape Epic, but only in 2018.

“The plan was to come here in 2018 and win, but we are a year early!” said Schurter. “This is very special. To win the Olympics and then come to South Africa and win the Cape Epic, that is great. After Rio it was always my intention to come and win the Absa Cape Epic, but this has taken us by surprise. I thought next year would be our year. We are ahead of schedule.”

The 2017 Absa Cape Epic winner had nothing but praise for his back-up team of Van der Heijden and Frischknecht. “I have to say, our backup team was outstanding. To come here in their first Cape Epic and do so well is incredible. They are very special guys and they make the team very special. They made no mistakes all week.”

Past champions like five-time winner Sauser have emphasised that the Absa Cape Epic can only be won with a back-up team. That point was proven yet again by the SCOTT riders. “You need a back up team to win this event, and as we have seen this week you need a good back up team,” said Schurter.”

Grand Finale stage winner Michiel van der Heijden could barely contain his excitement, grinning from ear-to-ear after a phenomenal debut at the race.

“I can’t describe it; this is just unreal,” he said. “We have two stage wins - which I never expected at the start of the Absa Cape Epic - and the team has won overall. It’s incredible. We have definitely surprised ourselves. The strategy for this year was for us to check the race out and then to come back in 2018 and help the SCOTT team win. Now I don’t know what we’ll do net year!”

Prologue winners and race leaders for the first four stages of this year’s Absa Cape Epic, Manuel Fumic and Henrique Avancini, also finished with big smiles in Paarl despite dropping down to fifth in the overall standings. “We had more ups than downs this week,” said Fumic. “Overall, it was a good week for us. We came here to win the Prologue and we achieved that. Now we are going to drink lots of red wine and gin & tonics.”

Christoph Sauser, who came out of retirement to try and win his sixth Absa Cape Epic, believes that the performances of cross-country specialists have changed the nature of the race, which is normally considered a marathon riders event.

“I think this year has shown that the dynamic of the Absa Cape Epic has changed,” said Sauser. “Previously you could go slow and warm up in the first hour, but this year it has been full on for the first hour of the race. You needed to ride really hard as there was no let up. Going forward, I think we will see faster starts now and riders will have to change the way they train, focussing more on speed and cutting back on long hours as they race starts to get closer.”