The Ultimate End to an MTB Stage Race

The Lourensford Ultimate is a brand-new trail. A section of singletrack befitting of the final kilometres of the race with #SeriousGEES, the FNB Wines2Whales Switchback. 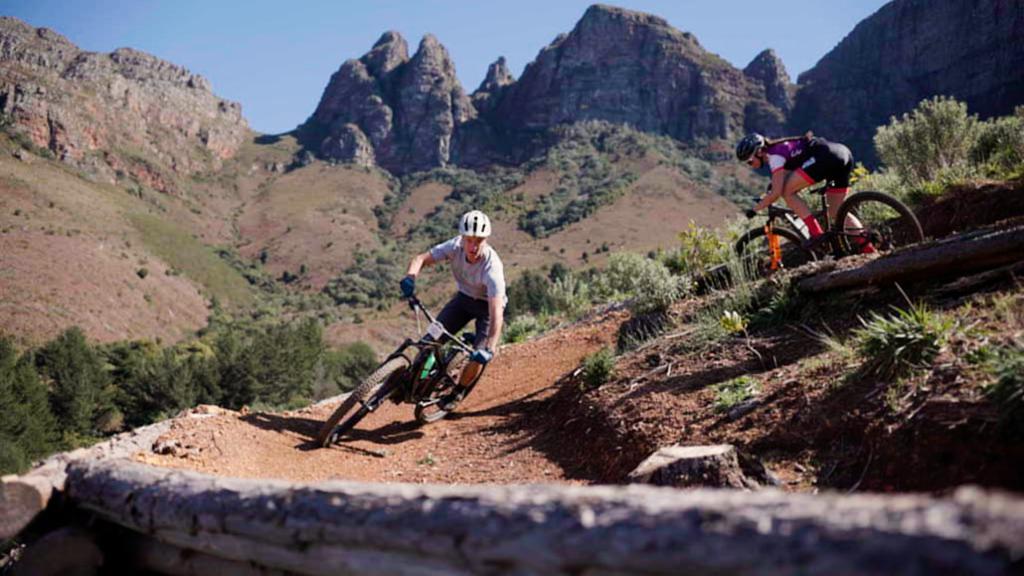 The Lourensford Ultimate is a brand-new trail. A section of singletrack befitting of the final kilometres of the race with #SeriousGEES, the FNB Wines2Whales Switchback.

Built for the FNB Wines2Whales Switchback the Lourensford Ultimate was first ridden by the elite women who headlined the Chardonnay race. On Sunday, 7 November; Candice Lill, Mariske Strauss and co. got the first taste of the trail. While the Pinotage and Shiraz entrants will have to wait for 10 and 14 November respectively to get their chance to rail the 7 kilometres of berms.

Laid out by Johan Krigler and the Cape Trails team and built by a collaboration of trail builders the Lourensford Ultimate is in effect a series of singletracks from 430 meters above sea level and dropping to just 70 metres. Each time the trail crosses the road a new named-section of trail begins, but to simplify matters the entire segment is known as the Lourensford Ultimate.

“The final singletracks coming down to the final FNB Wines2Whales finish line, in Lourensford, are so, so, awesome” Sarah Hill gushed. The Liv Racing rider had finished fourth on the general classification and had grown into the race as the amount of singletrack increased. “This time I didn’t fall. But I remember the exact corner where I did when I pre-rode the Lourensford Ultimate with the Wild Air TV guys. It’s very fast, very flowy and you can carry your speed. Having dropped off the pace slightly on the last climb it was great to be able to look down the switchbacks and see the other women ahead and try catch them on the Ultimate descent.”

There was paise in general for the Chardonnay concept, which sees the women’s elite and age group teams starting in an AA group 15 minutes ahead of the first men’s and mixed category teams. “Having our own race is fantastic” Dimension Data Veterans category winner Fienie Barnard said. “To be able to ride all the amazing singletracks which make up so much of the FNB Wines2Whales route, without having men racing up being us, their brakes squealing, takes a lot pressure off. It allows us to really enjoy the trails to the fullest. And I’m sure it will attract a lot more women to this race.”

“I loved the FNB Wines2Whales Chardonnay” Marleen Lourens added. “I definitely won’t be missing it ever again. To have the trails to ourselves like that is really special.”