Rowena Kemp was the ultimate winner of the FNB Wines2Whales Champions Chase competition.

Rowena Kemp was the ultimate winner of the FNB Wines2Whales Champions Chase competition. The Johannesburg rider did not keep the prize for herself, however, having won the lucky draw for a top of the range BH mountain bike she negotiated with the bike brand to receive two lower-specification bikes rather. One for her and one for her cycling partner.

The FNB Wines2Whales allowed the Serious GEES of the usual end of season mountain biking celebration to continue in a virtual capacity, despite the restrictions imposed by the Covid-19 pandemic. Riders were able to join the fun on the trails or on Zwift, as the FNB W2W Champions Chase pitted amateurs against some of the best elite mountain bikers in the world. Strava segments in Bloemfontein, Gauteng, KwaZulu-Natal and the Western Cape provided the incentive to hit the trails. While Watopia’s Road to Ruins ensured a challenging Zwift race.

Lucky draw prizes were awarded to riders who completed either a Strava segment or took part in the virtual Champions’ Chase on Zwift. With prizes from the trail centres, wine farms and other sponsors there was every reason to get involved. The ultimate prize of a BH mountain bike was the one that most riders had their eye on however.

BH South Africa had graciously offered the choice of either a DX851 Lynx Race EVO Carbon 8.5 or an ER720 Atom X Lynx 5.5 Pro e-Bike to the lucky winner. Given the fact that it was a lucky draw the thought was that the victor may prefer an e-Bike to a full suspension race bike, but as it transpired, the lady whose name was drawn from the virtual hat preferred to share her prize.

Rowena Kemp was the fortunate rider, having ridden the Northern Farms route. “I was so surprised” Kemp confessed, taking up the story of how she found out that she had won. “Firstly, I nearly missed the message on my Strava app, luckily a friend of mine let me know and I immediately emailed FNB Wines2Whales. I honestly thought I had won some socks or a cycling shirt. I was so surprised and shocked that I won a bike; never mind the fact that it as such an expensive bike! I actually could not believe it until I saw my name as a winner on Facebook.

“I am a single mom so cycling is my escape and challenge” she continued. “My friend, and riding partner, Irma Schoeman’s kids are out of school and her husband is happy for her to go cycling on the weekend. We have both been mountain biking for just under two years and love it so much. I try to ride at least once on the weekend and every second Wednesday, at Cradle Moon. I entered the Champions’ Chase because Irma told me to. Our dream was that one of us would win an FNB Wines2Whales entry for 2021. I didn’t even know there was a bicycle up for grabs.”

“I joined the challenge on the final Friday and rode the route at Northern Farms with a few friends” Kemp explained. “Northern Farms is one of my favourite places to cycle. It was a great day out, as usual, and also cool to try a slightly different route to the one we usually ride.”

Having been informed of her victory Kemp was eager to find out if she could swap the high-spec prize bike for two lower-spec models worth the same value as the top-of-the-range one. “I have a 26-inch Trek bicycle that I have been using. It’s an old bike of my dad’s, so any bike would be an upgrade for me” she laughed. “Just having my own bike would be fantastic! When I spoke to Mathew, from BH, he said it was possible to get two bikes for the same value as the original prize. He even suggested an e-Bike and a mountain bike. Whilst I would appreciate the expensive bike with all the top-end components even a bike of half that price would be awesome!” 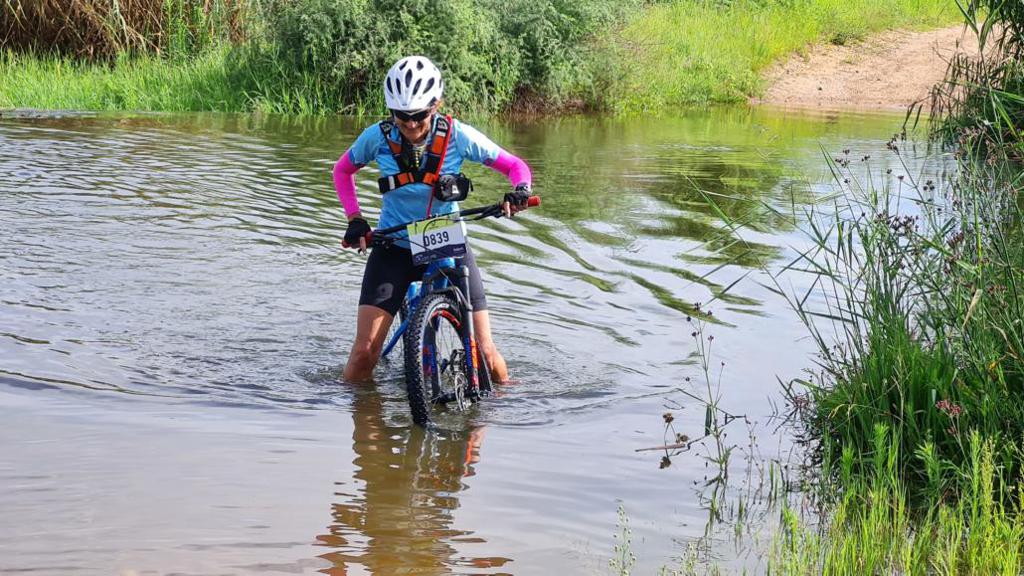 “Since Irma got me to enter the competition, I thought why not let us both get new bikes” she graciously allowed. “Neither of us have a carbon bike. BH was so accommodating and arranged two bikes for us. As you can imagine we’re super excited about the bikes!”

“Our hearts went out to her when we heard her story” Ray Wilson, the Director of BH South Africa smiled. “She needed a bike for herself but also one for Irma as they are both borrowing old bikes. We’re shipping two BH mountain bikes to her. They are highly capable full suspension bikes which are sure to excel on the trails of Cradle Moon and Northern Farms, where Rowena rides most frequently.”

“Most importantly, though, they’ll help her take her riding to the next level” Wilson promised. “We hope to see her and Irma, on their BH bikes at next year’s FNB Wines2Whales. I’ve already been in touch with Exxaro to find out if there will be space in the bus, with their Exxaro Jersey teams, to give her and her partner a lift down from Pretoria to Onrus.”

“We have entered Berg and Bush, which takes place in February 2021” Kemp said of her riding plans on her new bike. “Our ultimate goal is to enter the 2021 FNB Wines2Whales Switchback though. So, we’re saving up and improving our skills every weekend. Fingers crossed we’ll be on the FNB W2W start line!”