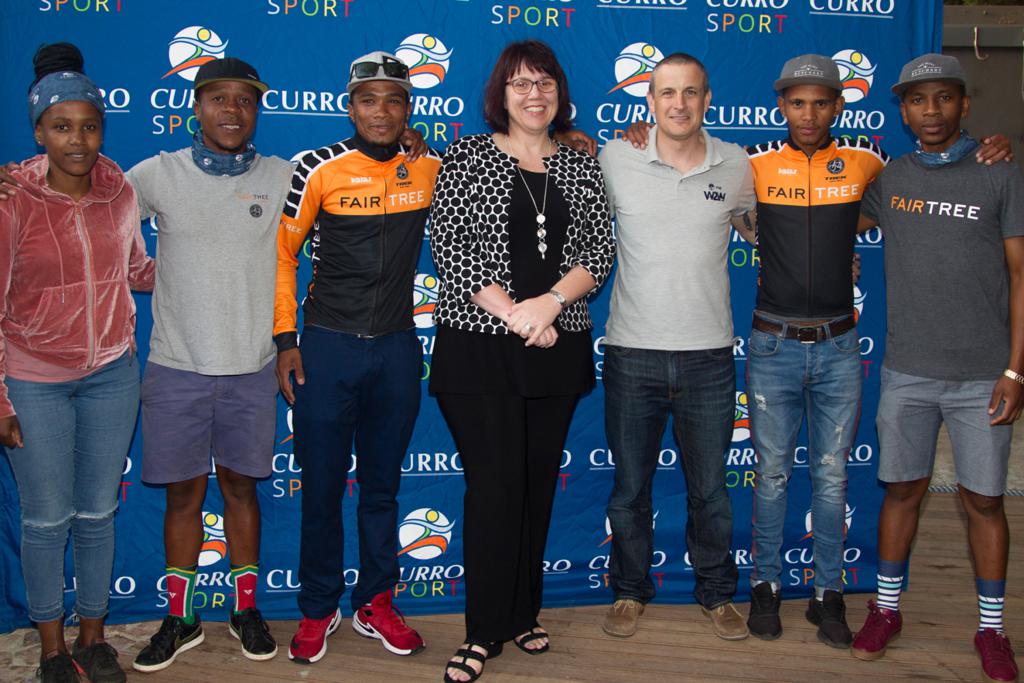 Lorenzo Le Roux and Luyanda Thobigunya, winners of the Exxaro Special Jersey at the 2019 FNB Wines2Whales, received their bursaries from Curro Holdings.

Most mountain bike stage races, including FNB Wines2Whales are raced in teams of two for a reason. When crossing high alpine passes and snaking through rugged terrain, the presence of a partner is necessary for safety. In a sport which takes riders into areas where the weather can change quickly or a fall can leave them unable to help themselves, help needs to be close at hand.

For riders who enter simply to soak up the experience, having a partner by your side gives you someone to share the memories with. While for racers, who are contesting for podium positions, the balance is a little trickier. As the old cycling saying goes: “sometimes you are the hammer and sometimes you are the nail.” Therefore, teammates have to look after one another, nurse them through the moments of weakness and thrive together, rather than racing against one another.

Luyanda Thobigunya and Lorenzo Le Roux of BMT Fairtree are one such team. In fact, they go beyond helping one another on the bike. The story began with them aiding each other to the Exxaro Jersey victory in the 2019 FNB Wines2Whales.

The Exxaro Jersey is a competition within the Shiraz race, in the FNB Wines2Whales series. It allows riders from historically disadvantaged communities to compete in one of the world’s premier stage races and race for prize money. In 2019, the stakes were raised by Curro Holdings, when they added two full scholarships to the prize the winning Exxaro Jersey team would ride away with. Valued at R1.2 million each the bursaries are set to cover the education of two young South Africans, from Grade 1 to Grade 12 at any Curro school. The idea behind the prize was that the winners would each be able to nominate a family member to take up the scholarship.

Thobigunya and Le Roux won the competition by 14 minutes and 6 seconds after three challenging days of racing. In so doing providing their children with a lifechanging opportunity. There was however one issue, Le Roux has twins who turn six in 2020, meaning they will start Grade R next year.

In an act of truly inspiring generosity Thobigunya nominated the second of Le Roux’s twins as the recipient of his Curro scholarship. “It was a chance for our kids to have a better start in life and that is why we rode like we did!” Thobigunya explained. “Cycling has provided me with a reason to avoid getting involved with nonsense, like alcohol and drugs, but also now with the chance to provide a great education to Lorenzo’s children.”

His generosity comes as no surprise to those who know Thobigunya. Though shy by nature he is the key figure in the BMT Fairtree academy. “Luyanda is power” praised BMT Fairtree Academy founder Chris Norton. “I wish I could see him in action on a road team. I think he would amaze people with how strong he is. His climbing, in particular, is exceptional. He has put in a massive amount of hard work, on and off the bike, to become the great rider he is and the rest of the guys really look up to him.”

Le Roux, who works for South Industries – a South African company specialising in the manufacturing of hand-built carbon bicycle wheels – is eternally grateful to his FNB Wines2Whales partner. “This is why we ride; to constantly improve ourselves and our families” he said “I cannot thank BMT, Chris Norton, Fairtree, Exxaro and Wines2Whales enough, for providing us with the opportunity to race for such amazing prizes, let alone Luyanda and Curro. I’m so grateful to them and I’m sure my kids will be too!”

For Curro, education is a lifelong journey. “FNB Wines2Whales is more about the journey than the destination and, as South Africa’s largest independent education provider, we’ve spotted great synergy in this message” Marí Lategan, Head: Marketing and Communications at Curro Holdings, stated. “We are looking forward to starting Le Roux’s children on the journey to an outstanding education at the Curro group of schools.”