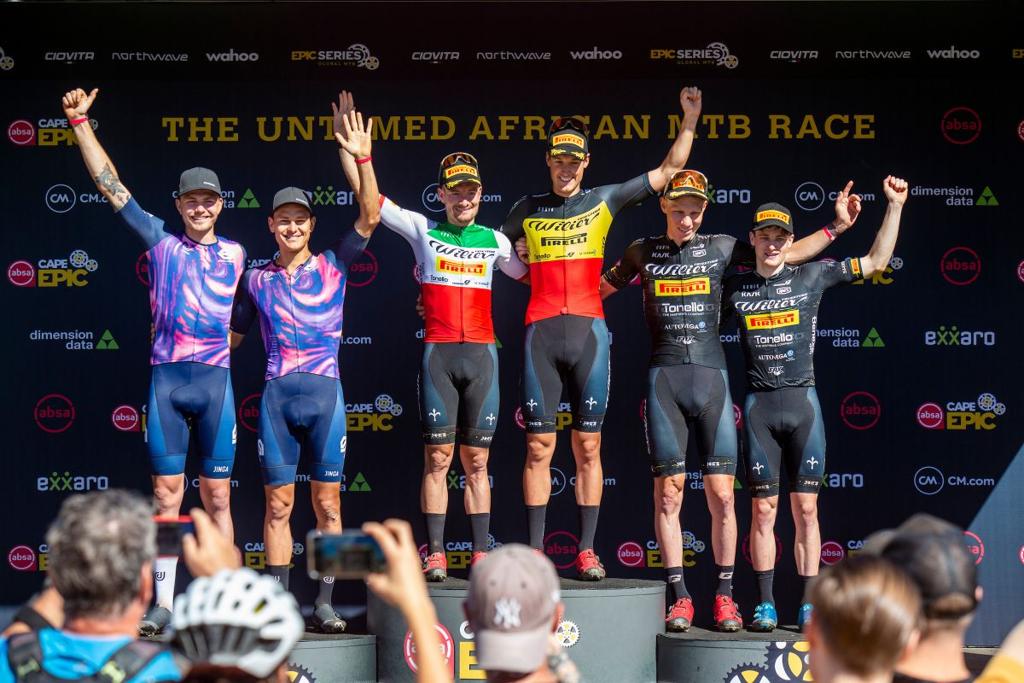 Fabian Rabensteiner and Wout Alleman (Wilier-Pirelli) rode an absolutely flawless race to win Stage 6 of the Absa Cape Epic. Speed Company Racing (Lukas Baum and Georg Egger) finished second on the day, but more importantly, they did some damage to the overall lead of Canyon Northwave MTB. Baum and Egger will start the Grand Finale on Sunday just 02:45 behind the yellow jersey leaders. The race for the Absa Cape Epic is wide open going into the final day.

On Stage 6 Wilier-Pirelli looked strong from the start; they attacked on the first climb, taking Speed Company Racing and Toyota-NinetyOne-Specialized (Matt Beers and Christopher Blevins) with them. Beers and Blevins soon dropped off the pace with Wilier-Pirelli also able to pull away from Speed Company Racing. The yellow jersey leaders Canyon Northwave MTB (Andreas Seewald and Martin Stošek) appeared to be struggling, particularly Andreas Seewald, who is battling a rib injury.

From the 40km mark, Wilier-Pirelli was able to pull away from the chasers, riding to the finish without much pressure for the final 30km.

"That was a really good day for us," said Fabian Rabensteiner. "We were feeling good this morning so we decided to attack on the first climb. We kept a good pace, but the Speed Company Racing guys matched us and were really strong again. We were in a group for a while and that helped us save some energy; Speed Company Racing attacked at the second water point but we felt strong and got in front of them. From that moment we never looked back and just rode at our own pace to the finish. The stage was excellent, with lots of technical singletrack, which is what we like. Of the six Absa Cape Epics I have done, this is probably the best stage ever."

Wout Alleman added, "We knew Stellenbosch would be better for us as we like the trails here. We planned to attack today because we have not had the race we wanted this week; we wanted to get a result today. Tomorrow is another chance to show our ability and we will race hard again."

With overall leaders Canyon Northwave MTB seemingly faltering with the Val de Vie end in sight, Speed Company Racing has forced themselves into contention through sheer willpower and thrilling, attacking mountain biking. They've earned some new fans during the week, which Lukas Baum has detected.

"That was a good ride after a few mishaps earlier in the week. We are second overall, but I think we are in the leader jersey in the hearts of the South Africans! Today I just took a ticket on the speed train that is Georg and I held on to the finish. It was a great ride."

Egger added that the trails of Stellenbosch, and their pre-Absa Cape Epic training in the area, made the ride a lot of fun. "We tried hard to get away in the beginning but it just didn't happen for us. But we knew the trails from our training here so that made the race super nice. We have one day to go; we will definitely give it everything."

With one stage to go, Canyon Northwave MTB sits on a total time of 24:54:46.6, with Speed Company Racing on 24:57:32.2. Beers and Blevins are third in the general classification, almost eight minutes behind the leaders.

The Trail To Val de Vie is a relatively short 68km from Stellenbosch to Val de Vie Estate; it's no polite procession though. The racing is still on and Canyon Northwave MTB will be looking over their shoulders all day for the purple haze of the Speed Company Racing jerseys.