Raising a Glass of Chardonnay to the Women of FNB Wines2Whales

On and off the bike, the women of FNB Wines2Whales make the race the gees-filled event it is.

On and off the bike, the women of FNB Wines2Whales make the race the gees-filled event it is. From the full time staff behind the scenes, to Woolworths’ hospitality wizard Reinette Geldenhuis, to the bubbly hype-merchant Suzie Hüsselmann, to Erica Green who delivers route insight on the mic in the mornings and welcomes teams home over the finish line, in addition to all the women who contest the elite and age-group categories in the Chardonnay race.

It takes a [race] village to create serious gees and the FNB W2W is proud that the women of the event are the ones responsible for many of the key gees generators. From riders to the crew, behind or not so behind the scenes, the women of the race keep the atmosphere alive. 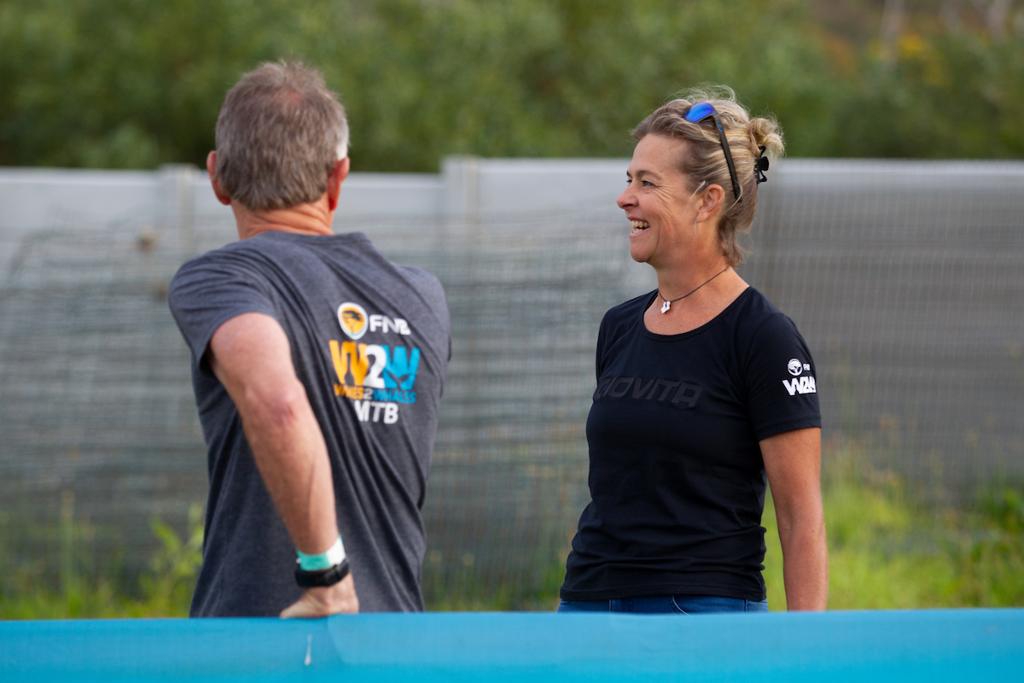 The best place to begin, with the list of wonder women, is in the Woolworths lunch and dining halls. There Reinette Geldenhuis is queen. She marshals the catering crew with a smile, ensuring every rider is fed to beyond their racing energy expenditure. If you return from FNB W2W heavier than you left home, you know who to blame… Not that you would, having over-indulged in all manner of treats over the course of the three days at the race. 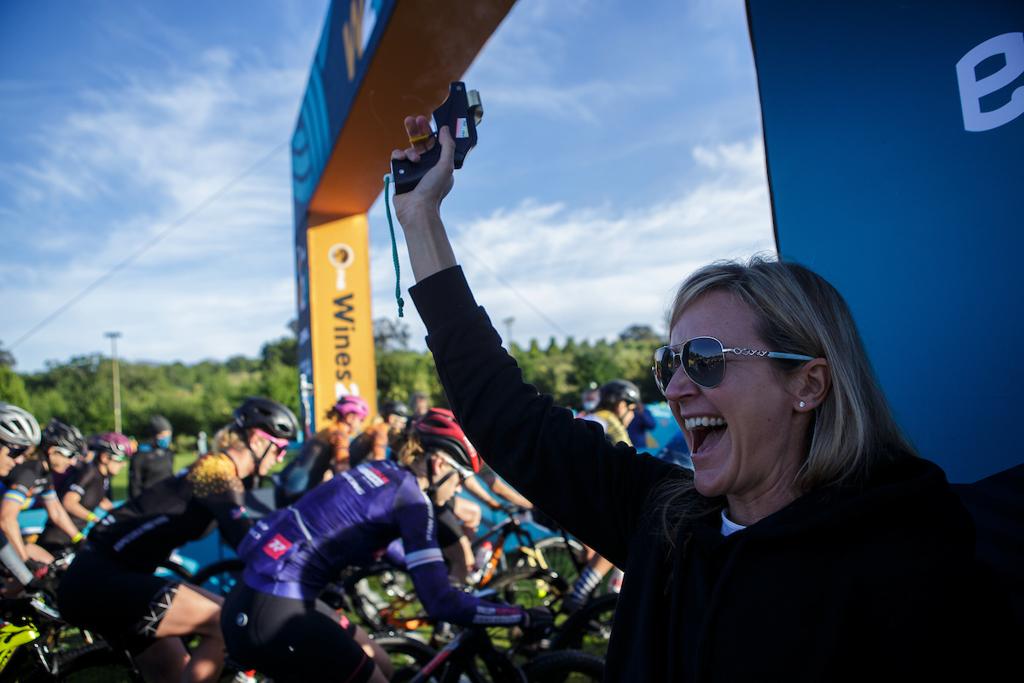 Hot on Reinette’s heels as women to know are the Silberbauer sisters, Cally and Bianca who run the Oak Valley wine bar, and Des Swart, the co-owner of the Tipsy Gypsy Artbar. With them on your side you can avoid queues for FNB W2W essentials, like wine and beer, and perhaps avoid paying a deposit on wine glasses even. (Though we didn’t tell you that…) 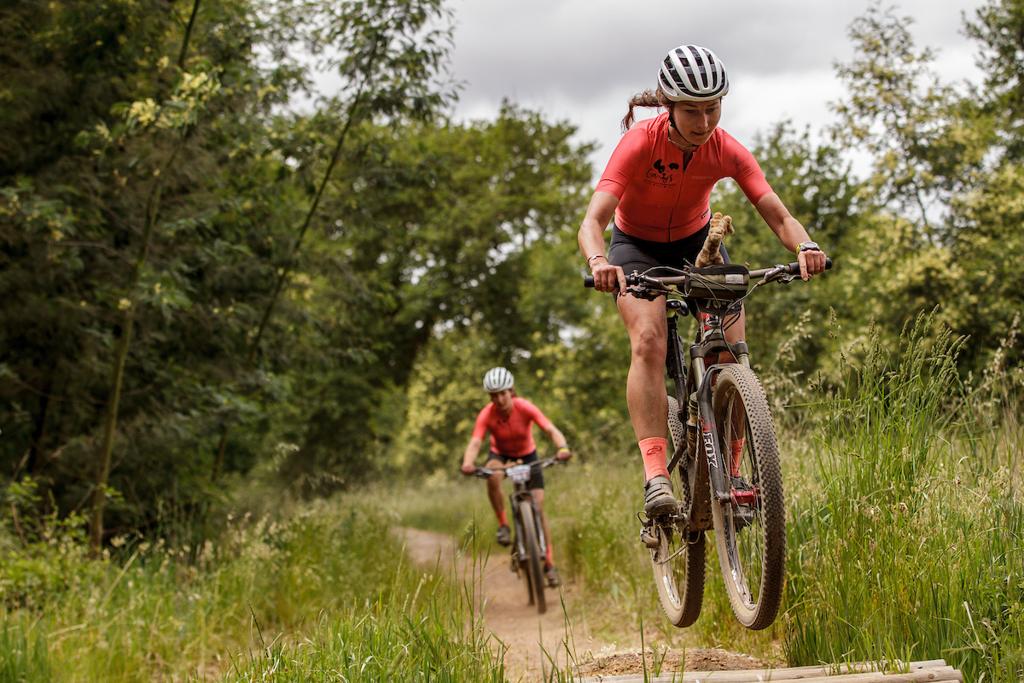 On the bike you’ll recognise the enthusiasm of Suzie Hüsselmann cheering you into water points throughout the event. Usually found with some sort of noise making device in hand (more so than just a microphone) Sooz, as she’s affectionately known, is everyone’s number one fan. She has favourites of course; usually riders who’ve taken part in five or more editions of the race, who she now knows by their posture on the bike and can spot long before the timing mats provide names and race numbers. 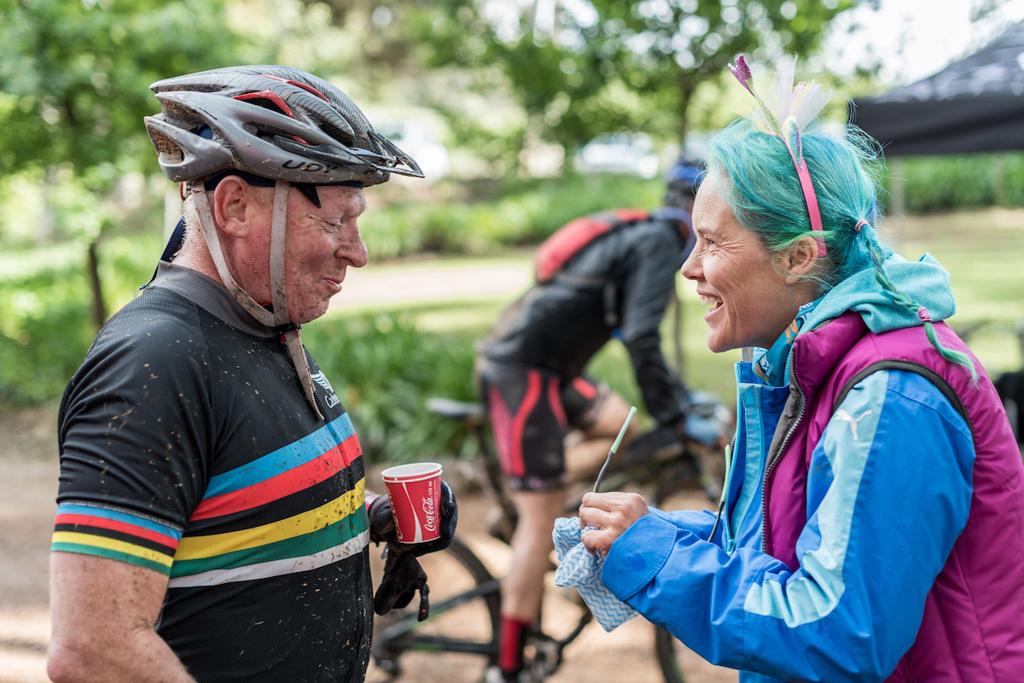 One of the riders Sooz is quick to spot is Hanlie Booyens. One of the legends of the sport in South Africa, Hanlie has taken part in every edition of the race, since the inaugural edition in 2009. Along with Jessica Knight, she is one of only two women in the Reserve Selection of ten FNB W2W stalwarts. The addition of age-group women’s categories, to the Chardonnay race, has allowed Hanlie and her rivals for overall victory in the early years of the race to extend their friendly competition.

Age categories have long been a part of men’s mountain biking, but FNB W2W was the first South African event to add women’s age groups too. The Chardonnay race, which kicks off the three-event series, was reimagined as a women’s race; with all the media attention focus and prize money reserved exclusively for women’s teams in the first weekend’s race. The elite and racing women’s age-groupers enjoy their own start group, ahead of the A-Batch, and many finish well before the fastest men’s and mixed teams as a result.

Since its inception in 2018 Hanlie and her Tiletoria Ladies partner, Fienie Barnard, have been unstoppable in the women’s veteran’s competition; winning all three editions. In their most recent victory, in 2021, they held off old friends and rivals Michelle Lombardi and Jane Seggie as well as Marleen Lourens and her partner Jeanie de Villiers. Completing a podium of veritable who’s who of pioneering mountain biking women. 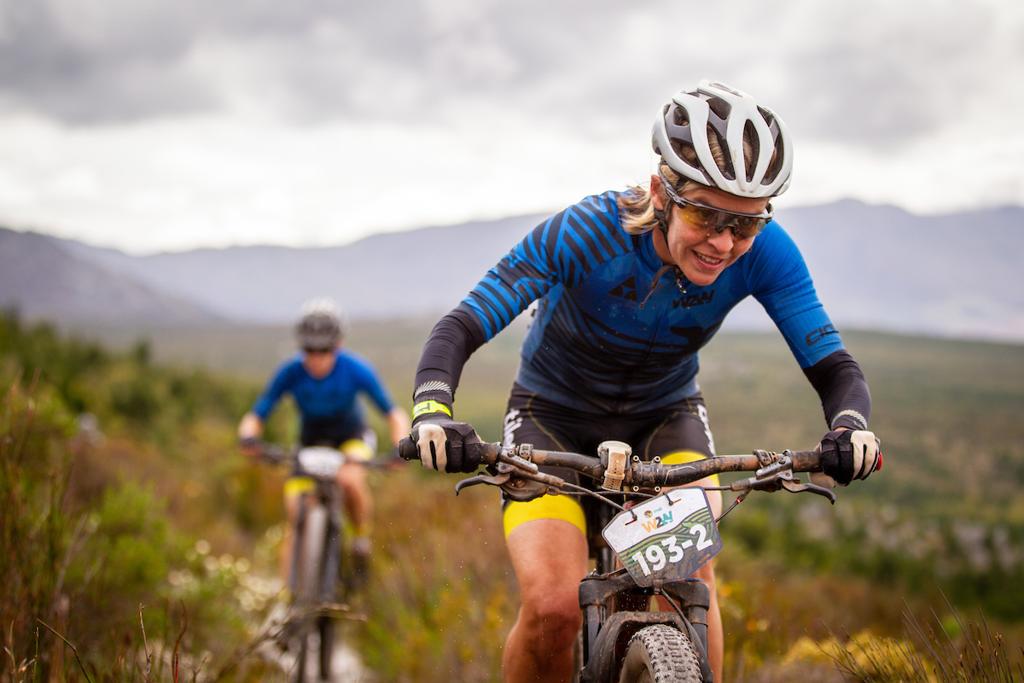 It goes without saying, but we like to say it anyway, that the women behind the scenes (the full-time staff of the FNB Wines2Whales) wear their hearts on their sleeves as they work year-round to ensure that every rider experiences serious gees and enjoy the end of year celebration of mountain biking to the fullest. To the women of MTB, we love you and cannot wait to welcome you all back to the FNB W2W in October!