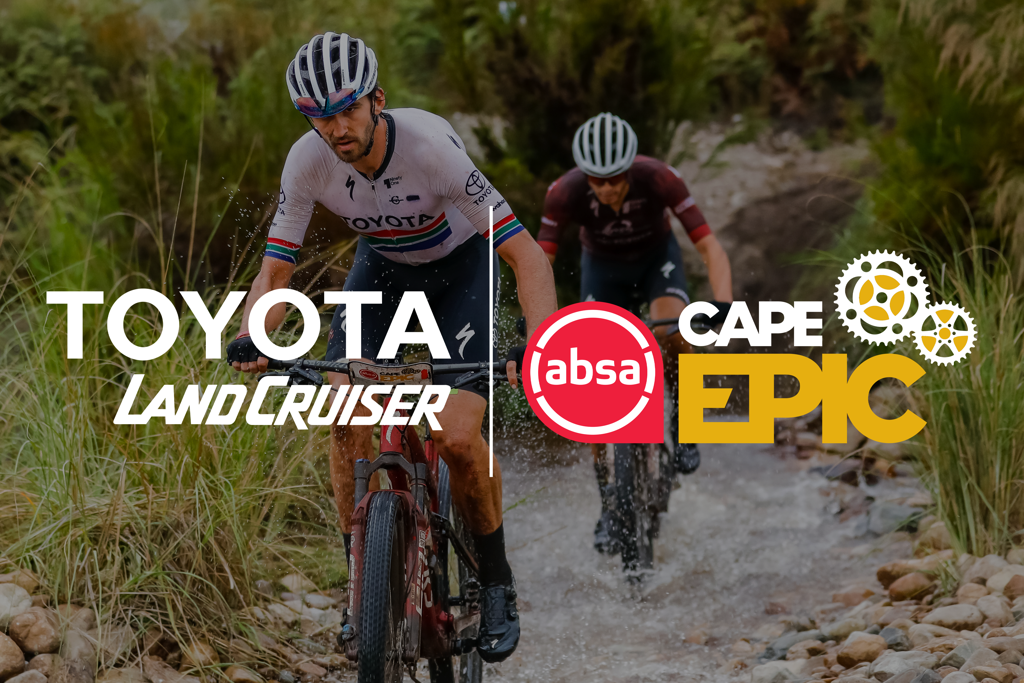 Under the agreement, Toyota’s extensive involvement in the event sees Toyota becoming a Headline sponsor, which includes designations as Official Vehicle Partner, Mixed category Sponsor, and Route Partner to the Absa Cape Epic.

As Official Vehicle Partner to the Absa Cape Epic, Toyota will be the vehicle brand of choice for the event’s staff, crew, and stakeholders. In addition, the Toyota Land Cruiser, renowned for its perfect blend of strength and refined luxury, has been identified as the preferred vehicle to transport guests of the Absa Cape Epic Luxury Route Tours. These Luxury Route Tours take guests to remote destinations along the race route to witness the racing unfold within touching distance of the world’s best and most serious amateurs.

In sponsoring the Mixed category, Toyota has naming rights for the category that sees the teaming up of men and women to tackle the Absa Cape Epic; it will be referred to as the Toyota Mixed category. The green category leader jerseys, which have been worn by Olympic Gold Medalist Jenny Rissveds, World Champion Thomas Frischknecht, 3-time Road World Champion Óscar Freire Gómez, multiple European Champion Natalia Fischer Egusquiza, and multiple-time Absa Cape Epic winner Ariane Lüthi, will be emblazoned with Toyota’s branding, further linking the brand to the category and to the event

The Absa Cape Epic is widely considered by mountain bikers to be the ultimate way to test mettle and prove partnerships due to its eight days of racing, taking in 650+ kilometres of racing and 16 000 metres of climbing.

As the Official Route Partner of the event, which was described by Christopher Blevins of Toyota-Ninety One-Specialized as "the toughest mountain bike race on the planet", Toyota takes the opportunity to widely promote its brand and vehicles to be equally as tough as the teams who brave the Absa Cape Epic.

Absa Cape Epic Founder Kevin Vermaak added. "Toyota has been a supporter of South African mountain biking for many years and we’re honoured to have the Toyota Land Cruiser as our official vehicle for 2023. It’s the ideal choice for our route designers that need the toughest and most reliable 4x4 to support their quest to design new and more challenging routes for the Absa Cape Epic."

“The Toyota brand is synonymous with endurance sport as evinced in our involvement and successes in the Dakar Rally as well as the Le Mans 24 Hours in which Toyota Gazoo Racing has had successive victories over the past few years. We have,  built a reputation for making reliable vehicles that last for the long term. Our partnership with the Absa Cape Epic, one of the most gruelling sporting events in the world, is also founded on endurance and sheer willpower – and these are values we are proud of as a brand,” says Glenn Crompton, Vice President of Marketing at TSAM.

The 2023 Absa Cape Epic route was launched on 21 September and it promises to challenge every team that has answered Africa’s call and signed up for the race taking place from 19 – 26 March 2023. The most physically demanding sections of each stage of the Absa Cape Epic will be branded the “Toyota Tough Sections” and teams from around the world will be reminded that toughness is a requirement to compete in the race.