RACING UNDERWAY AS CAPE TO CAPE RETURNS TO THE SOUTH-WEST

The action is underway at the return of the Cape to Cape mountain bike stage race as more than 1,000 riders took to the trails of the opening stage at Cape Leeuwin.

Day one saw riders take on almost 36km of racing, starting and finishing at the iconic Cape Leeuwin Lighthouse.

Brendan Johnston and Jon Odams led the way in the opening stage, crossing the line in 1:17:42, just over a minute clear of Reece Tucknott and Adam Blazevic, with Tali Lane Welsh and Joel Green just behind in third.

“It was good out there, the weather was a little ominous on the way down but it turned out to be perfect, the little bit of rain that we had settled the dust and we had really good dirt, stage one is always really hard and it’s got the most climbing, so we were happy to kind of get away and then just manage our effort from there,” said Johnston. “When you’re in the front you can ride and control things and we were really pleased.

Odams said that the pair worked well to move ahead of the field early on. 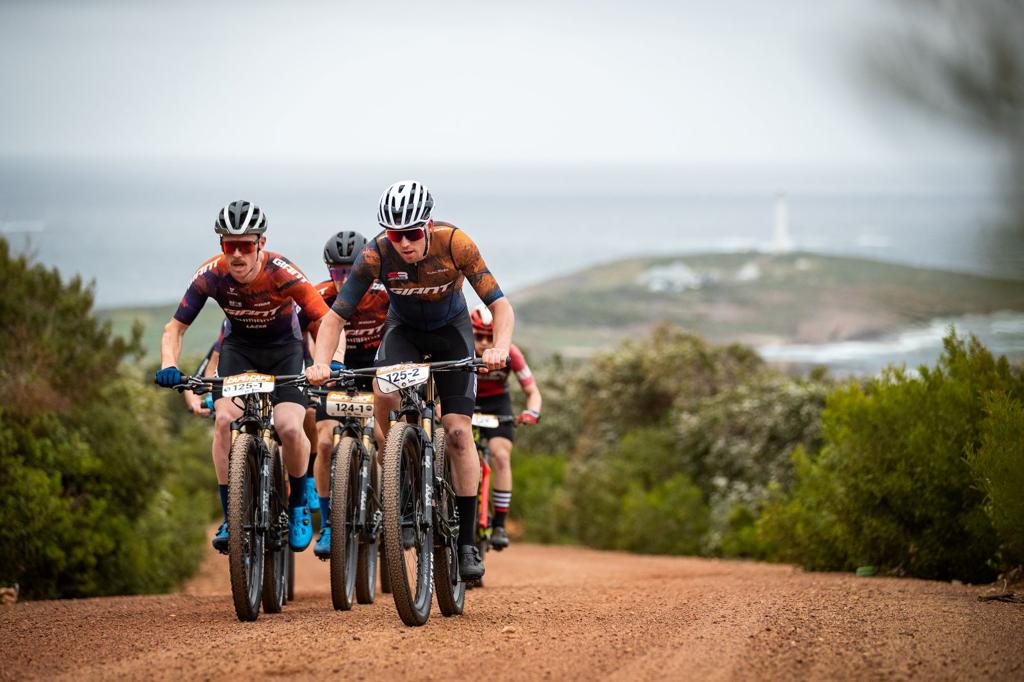 Mixed pair Emma Viotto and Karl Michelin-Beard picked up where they left off at August’s Reef to Reef, taking out stage one in a time of 1:30:28, ahead of Peta Mullens and Jarrod Moroni, with Holly Harris and Mitch Docker third.

“It was good fun, a lot more climbing than I remember but it was good to get out there, it was quite boggy in parts but the competition was good, it’s great to be here for the first time since 2019, this is one of my favourites,” said Viotto. “I think the mixed category is a very competitive field and it’s a lot of fun and that’s what you want.”

Michelin-Beard said that the pair enjoyed riding in different conditions to those they encounter when training at home.

“The trails here are really different, we’re from Canberra and it’s always fun to ride in a different place, the dirt is different, the trees are different and everything’s new,” he said. “It was surprisingly dry out there, on the drive here it looked like torrential rain but the trails were really good.” 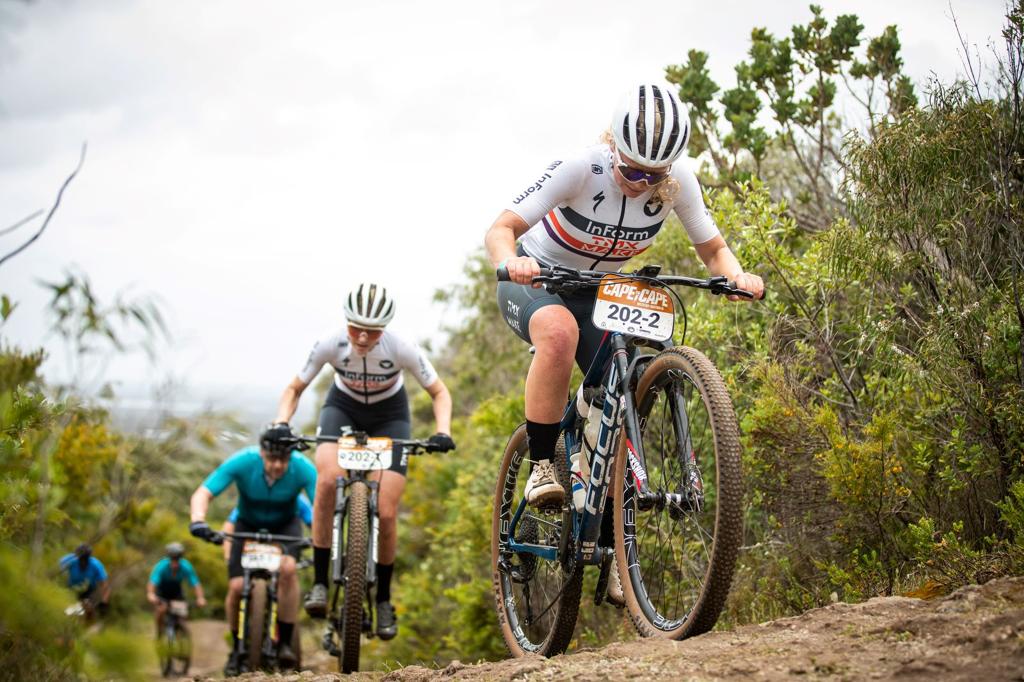 Lucie van der Schalk and Ella Bloor finished day one at the front of the women’s pairs, returning to Cape Leeuwin Lighthouse in 1:43:02, almost four minutes clear of Verita Stewart and Purdie Long, with Izzy Flit and Alexandra Durr rounding out the day one podium.

“It was super fun, definitely different to what I’m used to with the bunch start but I just stuck to Ella’s wheel and hoped for the best and she knew exactly where to go,” said van der Schalk.

This is the first event of its kind that the pair have raced in together and Bloor said it was an enjoyable day of racing.

“Once you got into the bush it was away from the wind and off the coast line and the soil was in amazing condition, it was so much fun sliding around on the loose, dusty corners, it was awesome,” said Bloor. “I’m pretty comfortable in a bunch coming from a road background, whereas Lucy is fresh from the EWS and it’s her first time in lycra so it’s a bit different but we compliment each other’s strengths and we had a really good day out there.”

The Cape to Cape field is full of stories of riders overcoming adversity and riding for a cause, none more so than Katherine Ross and Sarah Gardner. They have both been diagnosed with multiple sclerosis but have not let that get in the way of doing what they love, with the pair only meeting in person for the first time recently and teaming up to take part in this iconic event.

“It was amazing, exceeded expectations, the climbs were tough and I’m super proud of my mate getting all the way up the hill without walking, the hills were tough but the downhills and the single tracks were amazing,” said Gardner. “The scenery is unbelievable, especially coming back down the hill towards the lighthouse, I’m buzzing, it was so good.

“I’m glad that day one is over, the nerves have settled a little, I probably went out a bit hot and suffered a little bit on the hills, glad to have Kat there to give me a heads up about what’s ahead, the other guys on the course were great, we had a real good bunch, plenty of banter going, it was awesome,” she said.

With the pair only riding together for the first time briefly the day before racing, Ross said that day one of Cape to Cape was all about working out how they would come together as a pair.

“Today was all about figuring each other out as a pair, neither of us have done pairs racing before so how do you communicate, where do you sit, give each other space when you need. For me the last time I was here I don’t remember it being as pretty as it is, going through the forest and thinking I missed all of this last time, you’ve got to come and have a look again and enjoy it,” said Ross. “We’re down the fun end of the field and everyone is having a chat and encouraging each other up the hills and everyone is riding as a group and when someone gets up a hill everyone is cheering, lots of smiles.

Since the inaugural event in 2008, Cape to Cape has grown to become Australasia’s largest multi-stage endurance mountain bike race, with the 2022 edition to be held from 20-23 October.

Stage two sees the event move north to Boranup, with the 54km stage featuring plenty of single track sections, along with a start and finish line at Mr Barval Fine Wines.

For more on Cape to Cape visit https://capetocapemtb.com 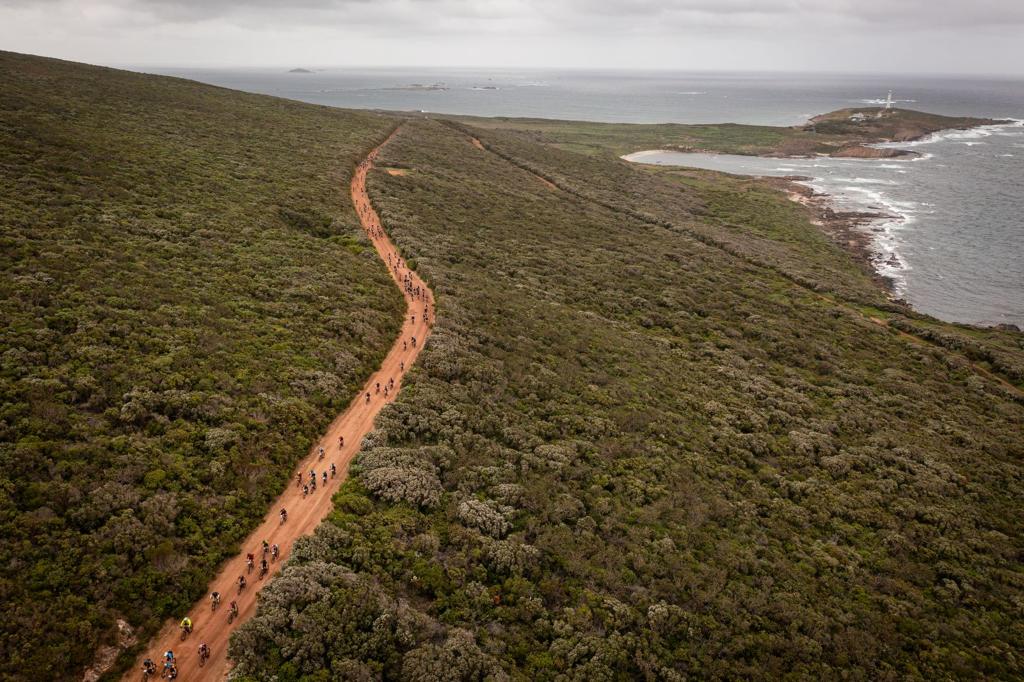