ACTION HEATS UP ON DAY TWO OF CAPE TO CAPE

Stage 2 of the 2022 Cape to Cape has wrapped up and it was an exciting day of racing down under.

The racing has heated up on day two of the Cape to Cape mountain bike stage race, with more than 1,000 riders taking on a fast and furious 54km course.

The second day of racing took riders to Boranup with its towering trees and snaking trails, along with incredible coastal views and a start and finish at Mr Barval Wines.

Victory in the men’s pairs came down to a sprint finish, with Jon Odams and Brendan Johnston again coming out on top in 1:43:55, beating Reece Tucknott and Adam Blazevic to the line by just four seconds, with Joel Green and Tali Lane Welsh a minute behind in third.

“It sort of unfolded how we were thinking it would, there was a big bunch onto the climb, we got a gap which became a selection after that, always after the Highway to Hell section where you turn onto the fire road there’s always attacks there,” said Odams. “We just marked the boys and made sure we had a little bit left in the tank, it was a nice little sprint at the end there, I was expecting a little bit more.

“It’s going well, that’s for sure. After three years it’s great to be back and it’s great to have a proper race, we’re loving it,” he said.

Johnston said that the pair enjoyed the sprint finish, with their victory capping off a great 54km of racing around Boranup.

“The finish kind of crept up on us a little bit, but we recognised it as the same way that we rolled out and knew that there was only a couple of k’s to go and from then with these mountain bike sprints with pairs you’ve got to kind of just do your own thing, you can go quite early and it’s at that stage where everyone is tired and you can hang on,” he said.

The mixed pairs saw a shift at the top with Peta Mullins and Jarrod Moroni taking the stage win and the overall lead, finishing the 54km in 1:52:55, just over two minutes clear of Emma Viotto and Karl Michelin-Beard, with Mitch Docker and Holly Harris third.

“It’s always a really close tussle in the mixed and today was no different, we were with the elite men for 20km and then kind of started to separate around Highway to Hell, we sort of attacked on the descent, but Karl is so strong he’s able to pace Emma back and give her a bit of push, then we went on the limestone over the top, I wasn’t that keen to but Jarrod was like a dog with a bone,” said Mullins. “We wanted the stage win today, I think the next two stages really suit us and I think we’ve put enough time in today for the green jersey which is really nice.

“For us there are certain parts of the track that don’t suit us and they’re the ones that go uphill, Jarrod had a better day today and when I was struggling on the hills he was able to give me good pushes to stay with Emma and Karl, we just made the difference where we think it matters for us and that’s on the technical aspects of the racing,” she said. “We hit two days of really mint single track now and I think that is kind of our domain, we like flat riding, the hills are enjoyable because you get the downhills but we prefer to ride flat singletrack.”

Ella Bloor and Lucie van der Schalk continue to lead the way in the women’s pairs, overcoming an early crash for van der Schalk to finish in 2:11:42, more than two minutes in front of Verita Stewart and Purdie Long, with Izzy Flint and Alexandra Durr rounding out the podium.

“It was all good, I just did a bit of tuck and roll,” said van der Schalk. “I’m pretty proud that Ella didn’t come off as well, I was more worried about her behind me. We were just in the pack at the start and someone tried to go around the outside and slid out, there wasn’t much I could do at that stage, it was so tight, just went for the jump and roll.

“Ella’s an absolute beast out there at the moment, I just want to do justice to her form, we had a fun day out there in the end, some good chunky sections which were pretty fun,” she said.

Bloor said that the pair worked well to get back into the lead as the stage progressed.

“I’m really proud with how we rode, we picked off the other women and gradually started getting a gap, it was just one of those days where nothing seems to go right so when you manage to pull it off you’re just really happy to get to the finish line and tomorrow is another day,” she said. “We were still with the lead men and mixed pairs at the stage of the crash, and we’d already dropped the other women, if we’d stayed in that bunch a bit longer we would have had a bit of an easier day but I feel like the hard days make the good ones feel better, they always make for a good story.

“We’re really looking forward to the single trail, I think that’s where Lucie is going to shine and I can’t wait to follow her wheels and her lines,” said Bloor.

Third placed Izzy Flint and Alexandra Durr had a tough day at the office, starting with a broken derailer for Durr. The pair managed to fix it with a cable tie and resumed racing, before their troubles continued with a slashed tyre for Durr seeing them finish well back.

Men’s solo rider Leon Wilken has overcome plenty to make it to the start line at Cape to Cape, with a motorbike accident last year leading to recent complications which have hampered his preparations.

“About a year ago I was riding enduro motocross and had a fall out in the bush, went spine first onto a boulder and spent 48 hours in intensive care having scans, everything came back and we thought it was good and then about 16 weeks ago my leg just completely stopped working, to the point where I was dragging it around,” said Wilken. “I thought it was all but done, but got some scans and starting working and working and kept on going and here I am after just eight weeks of training, just throw it out and go for gold.

“Feels strong, feels good, the fitness isn’t there but it’s more about being around and taking it all in. It’s tough without that big body of training behind you, it’s tough going but it’s just good chatting to people and everyone’s having a good time and just taking in the view and appreciating it for what it is,” he said.

For more on Cape to Cape visit https://capetocapemtb.com/ 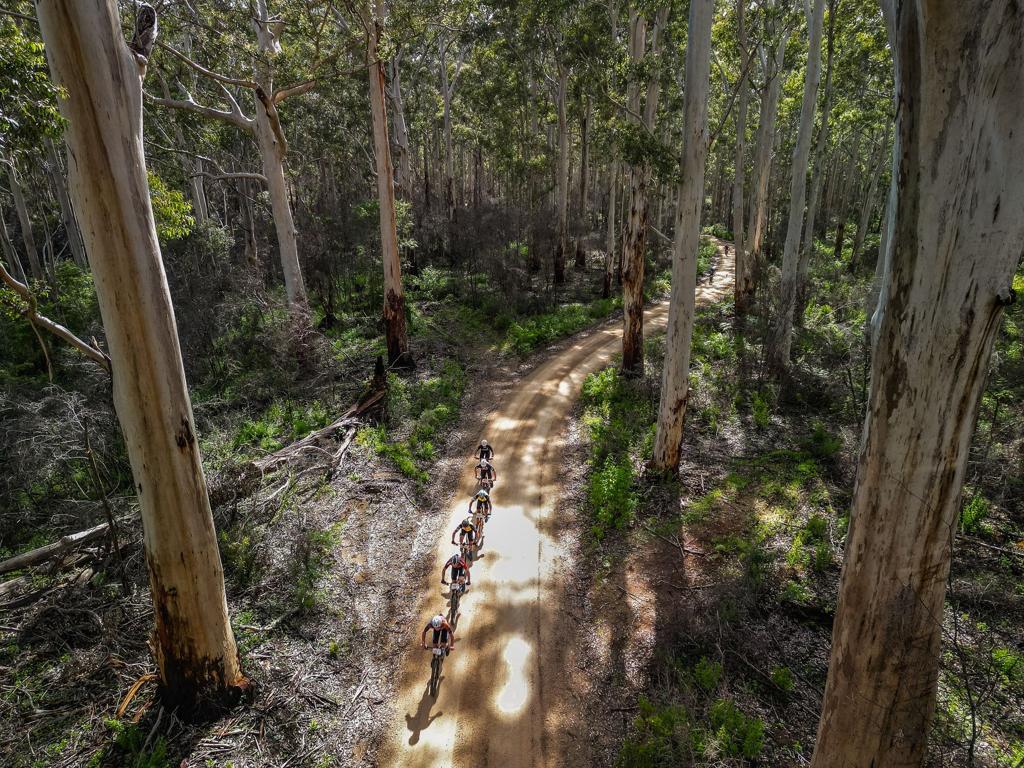